On Tuesday UMB Volley claimed Albania women’s national cup for the third time in their history after edging Tirana in straight sets in the final match. The competition had started in December with the prelims and drew to a close on Tuesday with more than 1,000 fans in attendance at the Asllan Rusi sports hall in Tirana for the derby featuring two teams from Albania’s capital city. 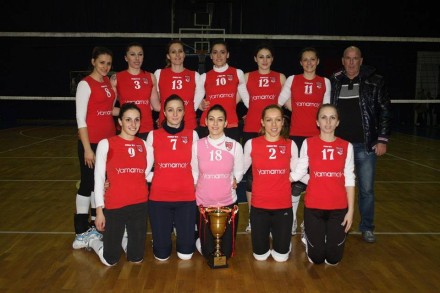 The semis were previously played on Monday with UMB Volley edging past Teuta with the score of 3:1. These teams fought bravely to progress to the last stage of the competition but in the end the players mentored by head coach Hasan Gurabardhi showed more quality to bring it home in four sets. As the score stayed at 1:1 in sets, UMB Volley changed gear and their supremacy in the game was no more to be questioned. In the second semi-final Tirana stormed back from two sets down to beat Partizani at the tie-break after a dramatic five-setter.

The final game was played with high intensity by both teams but UMB Volley could edge past in the end, claiming the first and second set with the same score (25-20) before the third and last continued up to the final 30-28. UMB Volley was paced by the experienced Klonarda Nezaj and Esmeralda Tuci and also owe their victory to the spikes killed by Erblira Bici and Enkeleda Braho. Tirana was hoping for another comeback like they had done in the semi-final with Partizani but in the end UMB Volley was just too strong. The team – still unbeaten this season – fully deserved to win the competition and will be now hoping to prolong their winning streak also in the national league.