Maaseik, Belgium, April 13, 2012. Noliko MAASEIK and Euphony ASSE-LENNIK are ready to battle for the second consecutive year in the finals of the national league that will be played with the format “best of five”. 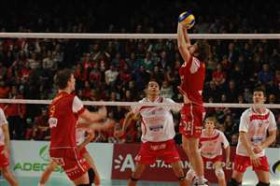 The Championship series will start this Saturday in the splendid “Lotto Dôme” with the home guys of Noliko trying to cap an already memorable year – MAASEIK has dominated the regular season, claimed the Supercup as well as the national cup and advanced to the Playoffs 12 of the CEV Volleyball Champions League – with yet another trophy.

“My players are very motivated and we all want to seize the crown; for me personally this would be the nicest farewell” said head coach Vital Heynen who will be leaving Maaseik at the end of the season to coach Germany’s national team.

“It won’t be easy as we have to start from the scratch and we shall not underestimate our opponents” he continued.

Marko Klok, the Dutch mentor of Euphony, sounds pretty optimistic: “We are going to fight for the title and are ready to stop Noliko’s supremacy. We know that we have to play our best if we want to have a chance to come out on top in the end”.