Bardejov, Slovakia, April 12, 2012. Slovakia remains the only unbeaten team after the second day of action of the European qualifier that is currently running in Bardejov. 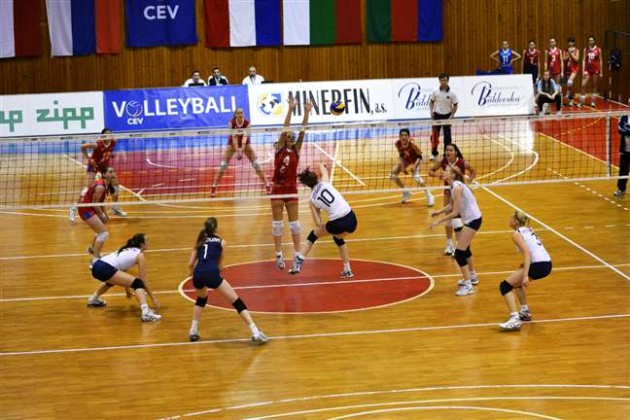 The home heroines beat Azerbaijan on Thursday in straight sets and stay atop of the tables with six points. In the other matches of the day Switzerland surprisingly beat the Netherlands 3:2 and Bulgaria edged Austria 3:1.

Switzerland opened the program by scoring a pretty surprising 3:2 win over the young “Oranjes” (24-26, 25-15, 25-18, 31-33, 15-12). The Swiss girls started very well and went up 5:2 and later 17:14 against the pre-favorites from Holland. Switzerland played very good in service and defense and moved up 19:16 in the opening set. However, Holland came back and leveled the score at 19 via some good serving by Marloes Hesselink. Switzerland restored its leadership at 24:21 but Holland completely turned the score around as Lauri Luijken was standing in the service area and eventually pocketed the first set with the score of 26-24.

The girls from Switzerland started better also the second set as they set the pace at 8:6 and 14:9 when Laura Caluori hit an ace. At the second technical time-out the score stood at 16:10 for the girls in red jerseys and Switzerland completely controlled this part of the game and deservedly won the second set 25-15.

Switzerland continued to display a solid performance and went up 12:9 in the third set. However, Holland turned the score around to 14:13 in their favor. The game was very tight, both teams fought bravely and the Swiss girls sailed to the provisional 21:17 in their favor thanks to some good play by their spikers. Switzerland’s defense and counter attack were very good and so this side ultimately claimed the third set 25-18.

The Swiss girls were better also in the fourth set and went up 16:12 at the second technical time-out. However, once again Holland fought back to level at 17 all and the final section of the set was very dramatic. Switzerland went up 23:21, but Holland came back to 23:23. Switzerland then wasted a couple of match points and finally Holland claimed this section of the game with the incredible score of 33-31.

The “Oranjes” opened with a 3:0 in the tie-break, but Switzerland came back and took the lead in end of the set. Zora Widmer hit an ace to call for the 14:10 for Switzerland that finally sealed this affair at 15-12 for the final and surprising 3:2. Spiker Elena Steinemann was the best player of the match with 33 points while Lynn Blenckers collected 16 points for Holland. “We didn’t have to play under pressure. We worked very hard last night to find some solutions after losing the first game, we made some changes and they were very fruitful. We knew that we have to be solid in serving and that our side-out must be very fast. Today we made 50 percent of our points after a negative reception which is very good for this team. It is our fault that we didn’t win 3:1. Our spiker Steinemann played very good today. She had a very bad season in the national league and today she had her best performance in a year. She is a good prospect for the future” said the head coach of Switzerland Florian Steingruber.

Slovakia pushed by the great local fans started this important match very well and went up 16:12 as spiker Andrea Strbova hit an ace. The local heroines quickly pocketed the opening set with the score of 25-19 and the story of the match did not change much in the next two sets as Slovakia played with great figures in all fundamentals.

The third set was leveled until 12:12 before Slovakia changed gear to go for a well deserved win in straight sets.

“We are happy that we won again in straight sets. All teams in this group are strong, so six points from two games are very important. Azerbaijan changed its style of play compared to the first match as they started with two setters, but we adjusted to the situation and I told my girls to play their own game. We are now preparing for the next opponent, Bulgaria” said the head coach of team Slovakia Eva Kosekova after the match.

Spikers Miroslava Rehakova and Andrea Strbova collected 15 points apiece for Slovakia while Yuliya Pshanichnykh was the best scorer for Azerbaijan with 11.

It looked like the fans in Bardejov were going to see an easy victory for Bulgaria. However, the Austrian girls woke up, started to play better and better and they won the third set 25-20. Bulgaria was ahead in the fourth set 8:6, 16:11, 21:19, but Austria fought well and wanted to take at least one point from this game by calling for a tie-break.

The Austrians leveled the score at 21:21, but it was not enough and finally Bulgaria claimed the last set 25-21. Team captain Simona Dimitrova collected 15 points for the winners, i.e. the same figure registered for Austria’s best scorer Srna Markovic.

“It was a nervous match. The first two sets were easy for us, but after that probably our girls thought that they had already claimed the game. The Austrian girls got their heads up and caused us troubles. We made easy mistakes. I am happy that we finally closed it out in the fourth set” said the head coach of team Bulgaria Radoslav Bakardzhiev.

“We found our play a too late in this match. If we had played like we had done yesterday, I think we would have had a chance to win. Our service was in the first two sets very bad. We started to play better in the third, but it was too late. I hope tomorrow we will be playing good right from the start” added Austrian head coach Li Qing.