Mogilev, Belarus, April 13, 2012. The young girls of Germany and Poland, i.e. the pre-favorites of the group, re-asserted their supremacy in the second day of action of the European qualifier in Mogilev as they claimed their respective second wins in straight sets by routing Lithuania and Belarus. 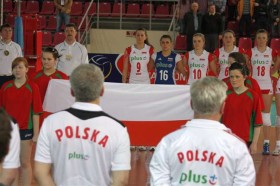 France rounded out the program at “Olimpiets” sports hall on Thursday by downing Latvia in straight sets too.

Germany opened the program on Thursday by outclassing Lithuania with a massive score line (25-13, 25-5, 25-20). Head coach Han Abbing used this match as an opportunity to test out all of his players especially taking into consideration that the most difficult games – where the pass for the final round scheduled for next August in Ankara will be at stake – are coming up this weekend, starting on Friday with France.

Lazitskaya is an outstanding player in all fundamentals but she could not resist to the solid team work displayed by the girls in red and white jerseys. Actually Belarus went up 16:14 in the opening set but afterwards could not keep that good pace and Poland sealed it with the score of 25-19. Belarusian head coach Mikhail Kovalenko tried out many changes in the second and third set but still could not avoid a quick defeat for his side.

The daily program was completed by France’s win over Latvia (25-12, 25-18, 25-20). Even though the girls coached by Beach Volleyball star Inguna Minusa pushed it hard to claim their first positive result in this tournament, still France was on a class of its own with a strong offense line and a solid reception. Latvia had a chance in set 3 to prolong the game but after a time-out the girls around head coach Jacques Beraud got back the necessary composure and quality to finish it off in straight sets.