he favourites all brushed off early mistakes en route to straight-set wins on the opening day of the "17th Princess Cup" Asian Women’s Club Volleyball Championship at the Nakhonpathom Municipality Gym on Thursday, with former four-time champions Bohai Bank Tianjin of China powering past hefty Zhetyssu of Kazakhstan in a hard-fought thriller. 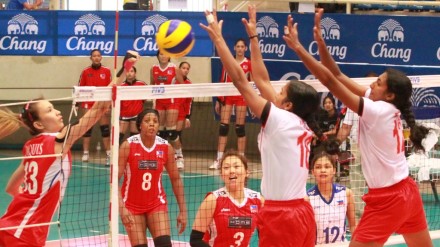 The annual championship is being held from April 17 to 25 and serves as a qualifying tournament to decide the Asian club representative to compete in the FIVB Volleyball Women’s Club World Championship, which will take place from May 7 and 11 in Zurich, Switzerland. Asia is the last continent after Europe and South America to complete their championship, with a wild card appointment completing the qualification process of six teams. Hosts Volero Zurich have automatically qualified and are joined by South American champions Sesi-SP, European winners Dinamo Kazan and wild card recipient Molico Osasco.
In-form PLDT of the Philippines outclassed India’s KSEB 3-0 (25-17, 26-24, 25-16), while after 53 minutes Taipei were too good for Singapore’s VAS 3-0 (25-8, 25-7 25-6). Nakhonratchasima delighted home fans with a scintillating 3-0 (25-16, 25-17, 25-14) win over Iran’s Matin Varamin.

For more articles about this competition click on Asian Women’s Club Volleyball Championship 2014.

POL M: Reszow vs. Belchatow for title of Poland