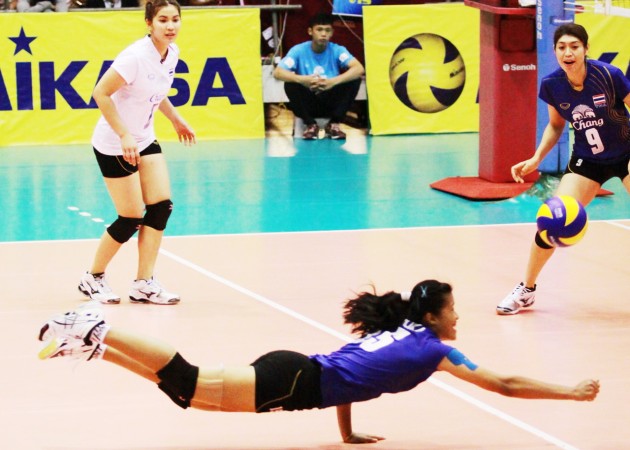 The nine-day championship serves as qualification for the FIVB Volleyball Women’s Club World Championship set to be held in Doha, Qatar from October 13 to 19.

In-form Toray Arrows, champions in this year’s Japan’s V-Premier League, emerged as victors of Pool A as they completed their preliminary-round campaign with a clean sweep of wins on Tuesday, while powerhouse Tianjin Bridgestone, eight-time champions of the Chinese Volleyball League, also completed their campaign in the same fashion on Monday.

“I fielded many new, young players in this match with aims of allowing them more competition experiences,” Chang coach Kiattipong Radchatagriengkai said. “Many players shone through with their impressive form, especially the two setters, Nootsara Tomkom and Pornpun Guedpard. However, we still have some mistakes which require immediate solutions.”

In Pool B, indomitable giants Tianjin emerged as the pool winners with eight points from three wins as Kazakhstan’s Zhetyssu came in second with seven points from two wins, San Barbara Polo & Racquet of Malaysia finished third in the pool with one win and S.L.B.F.E are bottom of the pool, failing to win a single set in the preliminaries.

On Thursday S.L.B.F.E and Asia World VC will battle it out in a playoff to decide the final place in the next round. The winning team will join the other seven in Friday’s quarterfinals while the losers will finish ninth.