Double the action as the men and women go their separate ways on FIVB Web TV powered by LAOLA1.tv 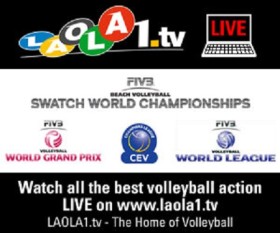 The 2nd stops on the men’s and women’s tours are upon us and this weekend sees the tours go their separate ways, the men to

Myslowice in Poland and the women to Sanya in China. FIVB WEB TV powered by LAOLA1.tv will be showing the semi-finals and
finals of both tournaments LIVE and FREE from the 28.04.-29.04.2012.

Rogers/Dalhausser defended their title in Brasilia but they will not take part in the Silesia Open in Mysolwice, Poland meaning
Brazilians Ricardo and Cunha head into the tournament as the number 1 seeds. There is plenty to play for given the fact that a
number of top pairings have not made the journey and we could we see a major surprise in the 2012 tour.

Home favorites Xue/Zhang are looking to take back-to-back titles after they won gold last week in Brasilia. With the home crowd behind them the Chinese pairing will have an excellent chance to make it two out of two in 2012. The Olympic Bay Sanya Open will be the first of three consecutive 2012 FIVB Beach Volleyball SWATCH World Tour events hosted by Chinese cities, followed by Beijing and Shanghai Grand Slams.

This year’s tour will consist of a staggering 8 Grand Slams and 8 Opens in 14 different countries across the globe. FIVB Web TV
powered by LAOLA1.tv will ensure fans can enjoy the best of the action LIVE and FREE* as well as on demand on http://fivb.laola1.tv