Roberto Piazza, who was born in Parma in 1968, has signed a 2-year-contract with Bre Banca Lannutti Cuneo. 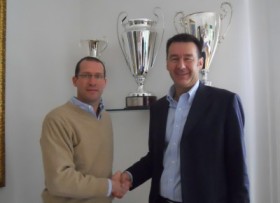 After wearing the shirt of Parma Maxicono as a player, Roberto Piazza started leading this club in 1992. as the assistant coach, together with the Brazilian coach Bebeto. Then he assisted the head coach of Sisly Treviso, Kim Chul Ho. In 1998. in Veneto, Piazza began a long professional cooperation with Daniele Bagnoli. In Dinamo Moscow Piazza continued the cooperation with Daniele and won the championship and the Cup of Russia. At the end of the 2008-09 season he was hired by Sisley Treviso for the first time as a “head” coach.

From 2011. he began leading the team fom Belluno. Starting from September, he will take the role as the head coach of Bre Banca Lannutti Cuneo.

Roberto Piazza commented: “I am honored to become the head coach of the top Italian team Bre Banca Lannutti. I have to thank to the company Piedmont Volleyball, the general manager Marco Pistolesi and the president Valter Lannutti on the given opportunity.“