NORCECA W: Cuba and Dominican Republic are the early favorites in NORCECA Qualifier

Three-time Olympic champions and tenth world-ranked Cuba and No. 9 Dominican Republic are the early favorite teams as the NORCECA Women’s Olympic Qualification Tournament gets underway at the Multi Sports Gym of Tijuana on Sunday. 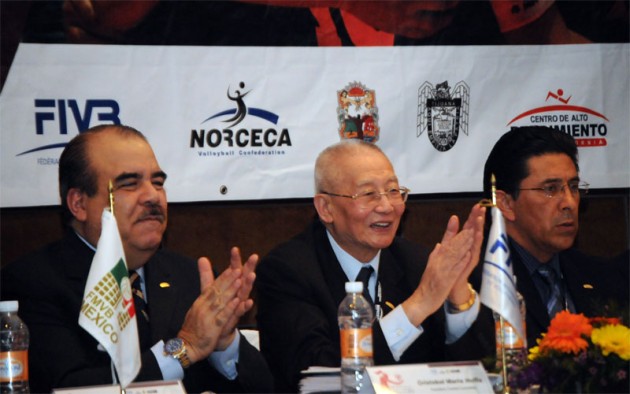 One ticket to the London Olympic Games will be granted to the winning side of the eight-team event to take place from April 29 to May 5 while the top FIVB ranked team not qualified here will move then to the World Olympic Qualification Tournament which duplicates as Asian Continental Championship in Japan from May 19-27.

No. 19 ranked Puerto Rico and No. 22 Canada are also considered as strong contenders to battle for the pass to the Olympics. Hosts Mexico (No. 27) and Costa Rica (No. 28) are units going through a developing process with many young new players added to those squads while Trinidad and Tobago (No. 34) is without some of their main players and No. 69 Honduras is taking part for the first time in a big international competition.

Dominican Republic, Puerto Rico, Canada and Honduras are set to compete in Pool A while Cuba, Costa Rica, Trinidad and Tobago and hosts Mexico will play in Pool B.

The top teams of each pool after the elimination round-robin are secured of berths in the semifinals and the sides placed second and third will battle in cross-matches in the quarterfinals.

Cuba finished fourth at the Beijing Olympics after taking the bronze in Athens 2004 following three consecutive gold medals in Barcelona 1992, Atlanta 1996 and Sydney 2000. They have taken part in eight editions of the Summer Games.

In their only participation at the Olympics in 2004, the Dominican Republic concluded in 11th place. Canada last entered in the Olympics in 1996 when finished in the ninth position. The North Americans also played in 1976 and 1984 finishing in eighth place each time. Mexico positioned seventh as the Games host nation in 1968.

The only other women team from NORCECA Confederation ever to take part in the Olympics is the representative of USA, already qualified to London via the World Cup where they finished second last November. The Americans have competed nine times, claiming the silver medals in 1984 and 2008 and a bronze in 1992.

In Sunday’s action, Dominican Republic plays Honduras at 12:00, followed by the match between Cuba and Trinidad and Tobago at 14:00. Puerto Rico meets Canada at 17:00 and Mexico entertains Costa Rica at 19:00 (All PDT, seven behind UTC). All the matches can be followed on live stream at www.norceca.org.

The coaches of the eight teams commented on their goals and expectations during a press conference held on Saturday evening immediately after the conclusion of the general technical meeting presided over by Mr. Jizhong Wei, FIVB President.

Arnd Ludwig (Canada): “This is the best team I have had during my three years as coach of our side. We are here to fight for the chance to be in the Olympics. I like our chances. We have a good team with a very good atmosphere which is one of the strength of our team for the upcoming week.”

Xavier Perales (Costa Rica): “We are coming with a group of experienced players who took part in the last two world championships and a group of young players. It will be our first contact since we started this new process and it is an opportunity to see where we are after all the things we have been developing.”

Juan Carlos Gala (Cuba): “Our team is very well prepared and ready to battle for the qualification to London. The performance on the court will have the last word and that is an athletes’ decision. I don’t have pre-tournament favorites since there are no small enemies.”

Marcos Kwiek (Dominican Republic): “We have been working very hard for three months with the only objective of earning the pass to the Olympics. The team is well focused and right now we have twelve players in condition to play. It will be a very tough challenge since there are other strong opponents. We will play with our hearts out to get the ticket.”

Matt Winkler (Honduras): “It is a pleasure to be here and to have the experience of facing some of the strongest teams of the world. A lot of members of our team are talented girls from the U-21 and U-23 squads, so to have this experience is only going to benefit them.”

Estanislao Vachino (Mexico): “We have a young team with a great volume of game. Our team works very well in the services and also in the reception. Since we started training the team has grown a lot and I hope it continues growing up during the competition.”

David Alemán (Puerto Rico):  “We are bringing the best talent available. We have fortified the middle blocker position and this is the tallest and deepest team we have had in recent years. The top four teams are Cuba, Dominican Republic, Puerto Rico and Canada but Mexico is an improved team. The ticket to London should be claimed by one of those teams.”

Francisco Cruz (TRI): “We don’t have our complete team since the Federation decided not to bring three athletes who are playing professionally out of the country. But we are here to give our best as always. Our goal is to continue improving. If I have to predict the most probable finalists those would be Dominican Republic and Cuba.”