Dominican Republic bested Canada in four sets (25-12, 27-25, 21-25, 25-15) for its second victory in Pool A of the NORCECA Women’s Olympic Qualification Tournament on Monday at the Multi Sport Gymnasium of Tijuana. 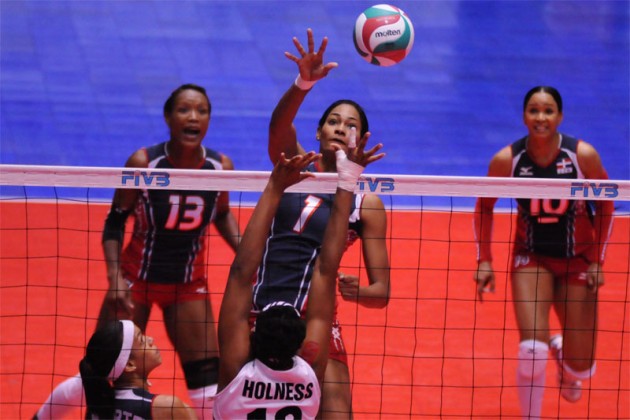 The Dominican side had a 10-9 edge in the blocks but dominated in the aces category 11-2. Bethania De La Cruz had a match-high 26 points, including six serving aces, to lead the Dominican Republic attack.

Annerys Vargas added 17 with four blocks and two aces while Milagros Cabral and Gina Mambru chipped in 14 and 10 respectively.

Sarah Pavan was tops for Canada with 24 points and Sherline Holness added 10 tallies.

“We are glad but not happy with the result or the way we played,” Cabral said.

“But as I always say, we have to leave this game behind and focus on the match of tomorrow against Puerto Rico”.

“We played good volleyball for moments but I don’t think we have played our best volleyball so I hope we can show it in the next few games,” Canada’s Tammy Mahon said.

Marcos Kwiek, the coach of Dominican Republic stated: “Our serve continued to be very good and we played good overall defense even though our reception faulted at times. It was important to play against a team like Canada for us to get into a good rhythm”.

“We made some adjustments after the problems with the strong serves in the first set and played better than the day before,” Canada’s Coach Arnd Ludwig said.

“The tournament really starts on Wednesday with the quarterfinals.”