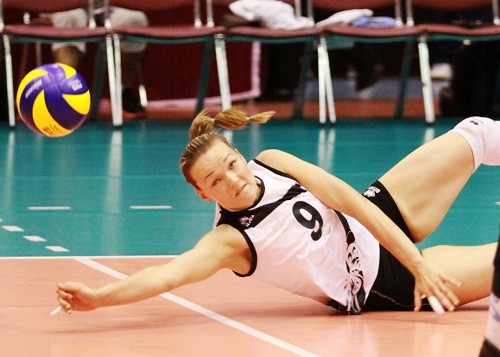 The four giants had a field day in the 1st-8th quarter-finals on Friday to breeze past their respective lower-ranked rivals. Only the eventual winning team from this week-long tournament will secure a berth to compete in the FIVB World Women’s Club Volleyball Championship to be held in Qatar in October.

On Friday, the strongly-built Zhetyssu from Kazakhstan overcame their nervousness shown in the first set, which they narrowly beat Iran’s Gitipasand 25-21 to stamp their authority in the remaining two sets 25-8 25-13 and wrap up the lop-sided encounter in 64 minutes.

The convincing win has carried the Kazakh side to go up against Toray Arrows, champions of this year’s Japan’s V-Premier League. The Japanese team on Friday proved a tough nut impossible to crack for Asia World VC, mercilessly crushing the Myanmar counterparts in a totally one-sided battle 25-6 25-11 25-7 in just 48 minutes.

Meanwhile, the high-profile Tianjin Bridgestone, the eight-time winners at the Chinese Volleyball League, also fared well in a crucial match against VTV Binh Dien Long An to brush off the Vietnamese team in easy three sets 25-17 25-12 25-13.

“Against Binh Dien, we did not play well although we beat them in straight sets. Libero Wang Qian could not put on her impressive form as she’s just recovered from sickness caused by an upset stomach. In the evening, we will set up another intensive training in preparation for our tough match against hosts Thailand tomorrow. Our target is to beat Chang on their home soil,” Tianjin Bridgestone’s head coach Wang Baoquan commented after the match.

Tianjin in the semi-finals will play Chang of Thailand, the team they lost in the final showdown of the Asian Women’s Club twice including the straight-set loss in the last year’s final in Vinh Phuc, Vietnam. On Friday, Chang fielded all substitutions to outclass San Barbara Polo & Racquet of Malaysia 25-14 25-9 25-12.

“I’m happy that my team beat the Malaysian side. I sent in all substitutions to give young players opportunities to gain competition experiences and they played according to plan. At the same time, the seniors will have chances to rest before playing much tougher matches in the final two days,” Thai head coach Kiattipong Radchatagriengkai said.

“We have played this Chinese team for several times. They are a strong team not to beat easily. We have to use all techniques and tactics we have to play them in the match. Also, we must play with the possible least mistakes. However, I’m upbeat that my players will overcome all obstacles in the match against Tianjin to advance to the final.”