“For us it’s good news that we won today,” Puerto Rico captain Victor Rivera said. “We were expecting to win of course. You don’t play a match unless you expect to win. We’re working hard, we’re playing decent. I think we could play much better. Now it’s another ballgame. We play Canada tomorrow. They’re playing great. We will come back and give 100 percent and see what we can do.” 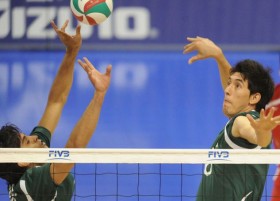 “We’re a little bit disappointed at the way we played today, especially the second set,” Mexico captain Gerardo Contreras said. “I thought we could have won that one. In the third, we showed the level we have and in the fourth, we couldn’t keep it together. The dream of staying alive is over for us. Now we just keep playing and raising the level of the group.”

“It was a good match, well fought,” Puerto Rico coach Carlos Cardona said. “It was a game with a lot of mistakes and a lot of anxiety.

We pulled it off. That’s a good result and it will take us to the semifinals. I’m happy with the result. We would have liked to have played better. We’re winning but we’re not happy with the performance. But a win is a win and we’ll take it. I understand that Canada is one of the top teams in the world. Canada has dominated us the last five matches. We would have to play perfectly and they would have to play poorly for us to win.”

“We were calmer in the second set during the important moments,” Mexico Coach Jorge Azair said. “We made many errors with balls in between that would have made the difference for us. This is what happens to us and our team. We’re disappointed with the result. We’re thinking about the game to come. Congratulations to Puerto Rico and good luck to them in the future.”