Puerto Rico collected a 25-21, 25-23, 20-25, 25-19 quarterfinal round victory over Mexico in the NORCECA Men’s Continental Olympic Qualification Tournament being held May 7-12 in Long Beach, Calif. Puerto Rico moves into a semifinal showdown with Pool B winner Canada on Friday at 18:00. 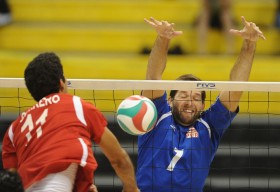 Puerto Rico was led by Ezequiel Cruz and Juan Figueroa who both had 20 points. Mexico was paced by Carlos Guerra’s 18 points, followed by Gerardo Contreras’ 15 points.

Gregory Berrios provided Puerto Rico with 18 of his team’s 40 digs in the match. Puerto Rico held a slim 9-8 block advantage and both teams served four aces.

You can hear how much this headshot...

THAT SET: Could you do that? (VIDEO)