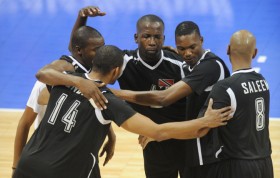 “The match went more or less as we expected, except they played better than we expected in the first set,” Cuba Coach Orlando Samuels said. “We have seen how the Trinidad team has grown. We watched the match against Mexico. We think they have improved. This match we played better than in the previous matches, especially in our combinations. We have to try to keep stabilizing our game so we can play better in the matches we have left.”

Trinidad and Tobago Captain Nolan Tash: “Coming into today’s match we knew that it was going to be a tough match against the Cubans, but we felt confident based on our assessment of their strengths and weakness,” Trinidad & Tobago captain Nolan Tash said. “With the exception of the first set, I thought we were flat today. We made too many errors. Our pass was relatively good enough. But I came up short in the attacks. You can site various reasons, but we won’t make any excuses. We hope to do better than we did today in our upcoming matches.”

“The difference was consistency,” Trinidad & Tobago coach Gideon Dickson said. “That trickles down into something called experience at this level. I believed coming into the game that we could have been even more competitive than we were. On any given day, who plays the best will and can win regardless of what people have written. That being said, our team wasn’t as efficient in the competition today. We have to learn from this experience because we have to play a match tomorrow against some team that we have never beaten before.”

BUL M: Teodor Salparov will be a...