USA remains in the hunt for an Olympic Games berth through the NORCECA Men’s Continental Olympic Qualification Tournament after coming back from a slow start to defeat Cuba 21-25, 25-18, 25-17, 25-16 in the semifinal round on Friday night at the Walter Pyramid in Long Beach, Calif. 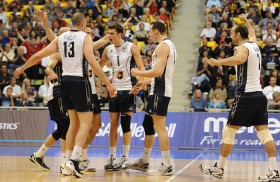 USA’s Matt Anderson scored a match-high 24 points with 17 kills on 24 errorless attacks, while Clay Stanley contributed 13 points in the victory. David Lee and Russell Holmes tallied 11 points each from the middle blocker position.

Cuba was paced by Wilfredo Leon’s 15 points, followed by 14 points each from Fernando Hernandez and Rolando Cepeda.

USA held sizeable margins in blocks (14-4) and aces (10-5) while taking advantage of 26 Cuba errors. Cuba entered the tournament as the top team in NORCECA and ranked No. 5 in the world. USA, the defending Olympic Games champion, is ranked sixth overall in the world and second in NORCECA.

USA will now take on Canada in the title match on Saturday at 20:00 with a spot in the 2012 Olympic Games as part of the prize for the winner. Cuba falls into the bronze-medal match and will play Puerto Rico on Saturday at 17:00.