“I think they are playing pretty good,” USA captain Clay Stanley said. “They have a bunch of great players on their team. We have to go back get some rest, wake up and have a game plan from our coaches. We have to start out better than we did today and play hard in all sets and I think we will win that game.” 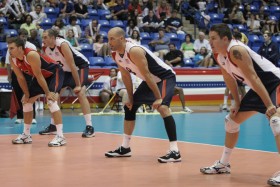 USA led in the early stages of the first set, but fell behind by three points at the second technical timeout and Cuba closed out with a 25-21 set win that included four aces. After Cuba tied the second set at 5-all, USA bolted to a 16-11 advantage by the second technical timeout. Cuba cut the gap to 17-15, but USA expanded the lead back to 19-15 and went on to win 25-18 with two key Stanley aces. USA built an early 11-6 lead in the third set with a 4-1 scoring run going into a Cuba timeout and eased into a 25-17 third set win. USA scored the first three points of the fourth set and reached the first technical timeout up 8-4 to continue the momentum. The USA never let down in posting a 25-16 victory in the fourth set.

“I don’t know what happened in the first set, Cuba put some pressure on us, but I am really proud of my team,” Stanley said. “Matt Anderson served his tail off tonight and he played great offense. Russell Holmes did a great job. We passed the ball pretty good. As a team we played an all-around good match. I wish Cuba the best.”

“First I would like to congratulate Cuba on another great match,” USA Coach Alan Knipe said. “It seems as though every time we meet it’s a tough match and tonight was no different. We didn’t start off the way we wanted to, but some of that credit goes to Cuba. I want to give a lot of credit to our passers tonight because Leon and Hernandez can put a lot of pressure on you. I was extremely proud of that effort as the match went on but more importantly of the group because they stayed together and kept focus. I am looking forward to the staff getting together to discuss Canada and getting our team the rest they need.”

“As we were expecting it was a very intense game,” Cuba captain Wilfredo Leon said. “It was a very difficult game, United States has a lot of experience. We have played them before and we knew what we were up against. The game is a game and what happened, happened. We hope to play our best and we wish the best to the United States.”

“First of all we would like to congratulate the U.S. on their victory and a very well played match,” Cuba coach Orlando Samuels said. “I wish them the best and hope they qualify for the Olympics. I think the story of the match was a match of a young team against a very experienced team. The team from USA includes many who have played in the Olympics and those who were in high national competitions. Our team is young and it showed in the high number of errors. It is difficult to play a team who dominates every aspect of the game. In all cases they deserved the victory; we lost some players and had to improvise but hats off to USA.”