Canada secured a ticket into the gold-medal match of the NORCECA Men’s Continental Olympic Qualification Tournament by rallying past Puerto Rico 22-25, 25-23, 19-25, 25-23, 15-11 on Friday evening in a semifinal match at Long Beach, Calif. 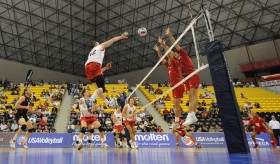 Canada controlled the net with a 15-8 block advantage. Puerto Rico held the offensive advantage with a 71-64 attack margin and 6-2 edge in aces. Earlier in the tournament Canada defeated Puerto Rico in the preliminary round en route to finishing 3-0 in Pool B and advanced directly to the semifinals. Puerto Rico reached the semifinals after needing to win a quarterfinal round match following a 1-2 Pool B record.