Canada will await the other semifinal winner between host United States and Cuba played later tonight. The gold-medal match will take place at 20:00 on Saturday, while Puerto Rico faces the loser of USA and Cuba at 17:00 on Saturday in the bronze-medal match. “I want to thank Puerto Rico for a tough match,” Canada captain Fred Winters said. “They made us earn it - that’s the hardest match I’ve played. I didn’t have a match that hard in my pro season. We were tired and didn’t turn it on the entire match. We had spurts. Tomorrow’s going to be harder, no matter who we play. 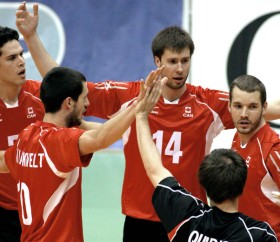 “We were rolling in the group game against Puerto Rico,” Winters added. “(Tonight) that Figueroa guy killed us. Once that happens, you can’t do anything right. I’m proud of our team because in the past there’s no way we would have won that match.”

“I want to congratulations Canada,” Puerto Rico Coach Carlos Cardona said. “We lost momentum at certain moments and that’ a matter of experience. They made adjustments and substitutions. It took a lot for us to adjust when they made changes. We lost this match on bad decisions in crucial moments.”

“In a way I was happy that Puerto Rico played this way,” Canada Coach Glenn Hoag said. “I think it builds character. It was good to see these guys come out and be aggressive. They had a good strategy to come out and contain Gavin (Schmitt). They were tooling us and got us out of our comfort zone. Justin (Duff) stabilized a lot of things in setting. I just put Dallas in to change it up. It worked somewhat. I congratulate PR because I haven’t seen them play with his kind of passion since a couple years back.”

“Tomorrow it’s going to be a different match,” Hoag added. “No matter who we play, this is our only chance to get to the Olympics. We’re going to give it our all and try to play better than we did today. This is a final for us and it’s the first in a long, long time. For us it is a positive outcome just in that.”

“Congrats to Canada,” Puerto Rico captain Victor Rivera said. “They were playing at a really hard level. They let their guard down against us. It happens a lot when you play at a high level. I think our problem is we had it and we didn’t control it. Their experience came out at the end. Of course they have a better team than us right now. In this sport, there is no small enemy. You just need to want it really bad. It’s all confidence. We just made too many mistakes in the end.”