Japan coach Tatsuya Ueta says a win over Cuba in their opening Pool A match in Hamamatsu would be an ideal tonic to help celebrate Japan's World League return home after playing all their 2011 edition matches overseas. 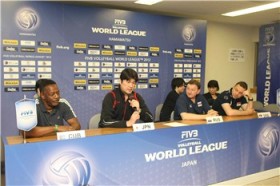 Japan host Cuba, Russia and Serbia in Pool A play on the opening weekend of the 2012 World League, which starts on Friday and will be hoping a return in front of their home fans will spur them on to improving their World League record.

Last year, following the devastating earthquake and tsunami, Japan couldn’t play any World League matches at home and went on to win only one game – in Germany – to equal their worst ever result in the annual competition.

In 18 editions of the World League, Japan have only 55 wins from 230 matches to their name. Their record against their first opponents Cuba is not better.

Japan, ranked 15th in the world, have not beaten Cuba at all in the World League – losing all eight matches across two editions – while their last win over the world No. 5 came at the 1995 World Cup. Since then there have 14 defeats at the hands of the Central Americans including a 3-0 defeat at last year’s World Cup.