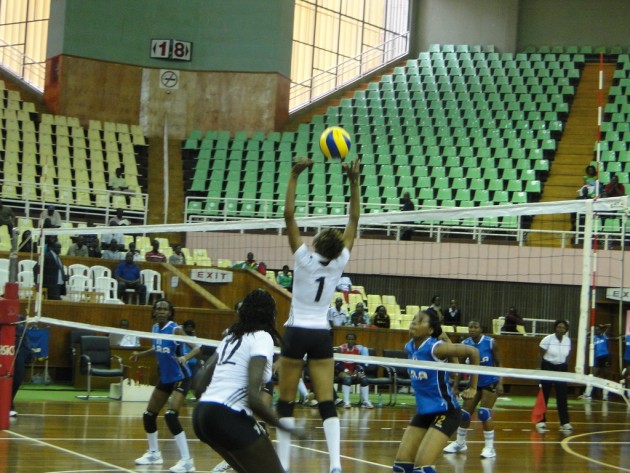 The semifinal matches will be held on Thursday where Pipeline plays FAP at 4pm (local time) while Prisons take on Chlef at 6pm.

Prisons coach David Lung’aho did not take chances as he paraded big names against Revenues.

Rwanda junior team Captain Seraphine Mukantambara impressed the crown with float services as Revenue fought to keep pace with Prisons but the hosting team displayed great form to lead 8-4 and 16-11 at technical time out before winning the set 25-14.

Prisons carried their devastating form to second set and attacking from all positions they took 8-2 and 16-5 at technical time out before cruising to 25-9 to gain 2-0 sets advantage.

Prisons wasted no time in the third set as they led 8-4 then raced to open up massive 10 points gap at second technical time out before winning the set 25-11 and advance to the semis.

Bassoko Moma who measurers 184cm, Mballa (189cm) and Theorine Mbeza (183cm) stood tall at the net to give Police 16-13 lead at the second technical time out.

Elissa Raharimalala and Tsirisoa Hasindraza tried to attack from all positions but they could not march a charged paramilitary side from Cameroon who maintained form to claim first set 25-15.

Police managed to overtake Stef at 10-9 and a combination of powerful spikes and great blocks saw the Cameroonian gain successive points to lead 16-11 at the second technical time out.

Stef fought hard to come back into the game and narrowed Police lead to two points at 20-18 but their porous net and back court defense saw Police claim the set 25-20 with Mballa’s attack from the right position.

Like in previous two sets, Stef opened the third period with focus and determination with skillful play by Melissa Athares and Nadjmah Ishmael to take 4-1 lead before cruising to 8-4 at the first technical time out. Police sealed the match with 25-20 win in third set.

NR Chlef of Algeria beat Mafolofolo in straight sets of 25-15, 25-18, 25-6 to set up a semi-final date with Prisons following an exciting quarter-final match that was closely followed.

The fourth quarterfinal match lived up to expectations after Kenya championships Pipeline sailed past Daring Club Motema Pembe 25-9, 25-13, 25-11 to advance to semis.

ARG M: First training for the Argentine team after qualifying for London 2012