Just hours away from the beginning of the FIVB Women’s World Olympic Qualification Tournament in Japan, most of the coaches expressed optimism about their team’s chances to claim one of the four tickets available here for the 2012 London Games. 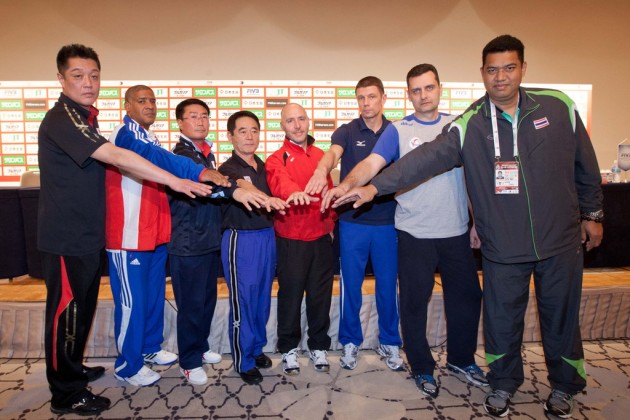 The event doubles as Asian Continental Olympic Qualifier and the top three teams and the best Asian team will get the visa to the British capital next July.
Teams of Serbia, Russia, Cuba and Peru are joining Japan, Thailand, Korea and Chinese Taipei for a round-robin competition from May 19-27 with two days of rest at Tokyo Metropolitan Gymnasium.
With the exception of the skippers of Peru and Chinese Taipei, who preferred to comment on the evolution of their teams, the rest are planning to be playing at Earls Court in London next July 29.
The Coaches spoke with the media during a press conference held at the conclusion of the General Technical Meeting at Keio Plaza Hotel on Friday night.

Following the excerpts of their statements:

Juan Carlos Gala (Cuba): “We are here looking for the qualification to London. The team is motivated and the players all know this is our last chance. Our team just finished the NORCECA competition so we are mentally and physically well prepared. The team is free of injuries and we are ready to do our best to finish among the top three teams.”

Norimasa Sakakuch (Chinese Taipei): “This event is also the Asian Qualifier and we want to do our best. Our team doesn’t have the international experience so we will need to play some matches before knowing where we are. Our last competition was the playoff for the Grand Prix against Algeria and each team won a match 3-0. Fortunately we won by points-difference.”

Masayoshi Manabe (Japan):  “We want to secure the berth in the Olympic Games so we will do our best to be there. The team has been training smoothly and we have no physical problems with any players. Hopefully playing in front of our fans can give us an extra. It is going to be a tough competition but I feel confident about our chances.”

Kim Hyung-Sil (Korea): “In our preparation we went to China to train and have matches over there. We had many matches against Chinese teams including three against the national team. We have completed a good training schedule and our goal is to be one of the teams qualified to London at the end of the competition.”

Luca Cristofari (Peru): “We are fresh from the South America competition that concluded six days ago. We arrived late due to travelling issues so we need to find our rhythm during the course of the competition which was good during our last match. Now I have 12 players to fill up every role and all my U-23 players are part of this squad.”

Sergey Ovchinnikov (Russia): “This is a very important competition for us since it is the last chance to win the ticket to the Olympics. We are taking the tournament very seriously even though we didn’t have much time of preparation. The Russian team began to train together on April 15 but we are confident about our chances.”

Zoran Terzic (Serbia): “It is very normal that the European champions qualify to the Olympic Games so we will do everything to play well, which we usually do here in Japan, and I expect to be the same this time. We have a little different team because of some injuries but in any case Serbia has very good players capable to do the job.”

Kiattipong Radchatagriengkai (Thailand): “Four years ago we were not able to make it to Beijing so now we want to reach the Olympics in London. We have done every effort to improve our team sending some players to China and Europe to get experience. We have added some young players to mix with veterans who are still very good.”