Cyprus concludes its first ever foray into the ‘big girls’ European Championship Sunday evening at 19:00 local time (16:00 GMT) in the “Spyros Kyprianou” Sports Centre when it hosts Latvia in the return match of the 1st Round of the 2013 CEV Volleyball European Championship - Women. Latvia had shut out Cyprus in straight sets (25-17, 25-23, and 25-13) last week in Riga. 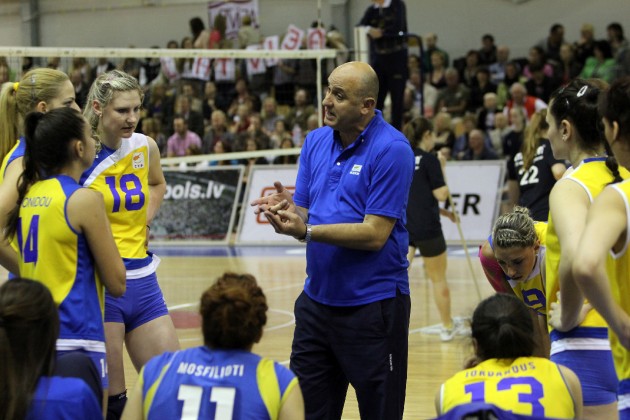 Despite the heavy loss in Riga last week, the Cyprus camp retains a semblance of optimism that the team can win the return leg, Sunday, and force Latvia to a “golden set”. Head coach Manolis Roumeliotis will be doing some re-shuffling within the team in a last-ditch effort to defy the odds and put up a fight against Latvia.
“We have a very difficult match ahead of us on Sunday,” said Roumeliotis. “Latvia has the advantage owing to their victory in the first match, but I strongly believe that we will improve on several elements of our play, mainly in reception and accordingly in attacking, and that will give us the chance to claim a victory and force the match into the golden set.”
The women’s national team program is undergoing a change in structure and outlook and head coach Roumeliotis is actively introducing a host of younger players from the junior national team to play alongside some more seasoned veterans. Latvia also fielded several youngsters in Riga last week in a team structured around their experienced 43-year-old setter Sana Catlaksa and is expected on the island in the early hours of Saturday morning with a similar line-up.
This is the first time in the history of Volleyball in Cyprus that the women’s senior national team ventures beyond the confines of the Small Countries Division and a possible comeback from last week’s defeat will certainly make the headlines here.