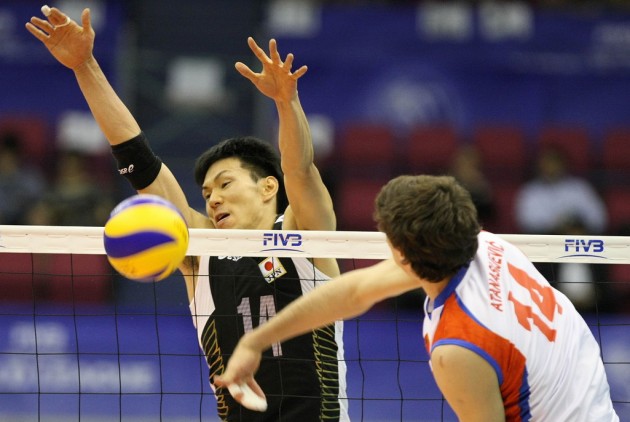 Serbia was led by the young Aleksandar Atanasijevic who delivered great serving off the bench with 20 points, five through aces. Five of his teammates were also in double digits in scoring  while Japan was led by Tatsuya Fukuzawa with 22 points, followed by their captain Takahiro Yamamoto with 21.

Neither team took much of a lead early in the first until a Shigeru Kondoh block on Milos Nikic, who had been attacking well with five scores in the set, gave Japan a 15-12 edge. But Nikic didn’t have much support as Serbia’s attack was error prone and Japan’s block was strong. Coach Igor Kolakovic brought in fiery opposite Atanasijevic who served on a mini-run of four straight points for his side, but eventually sailed one long to give Japan the set 25-22.

Serbia bounced back at the start of the second set, with Sasa Starovic back in at opposite pushing his side to a 9-5 lead. Serbia maintained that lead until mid set when Japan’s defence brought them back, with a miraculous dig by libero Osamu Tanabe leading to a Yuya Ageba spike. That started a five point run that saw Japan finally grab the lead 19-17. But again Atanasijevic brought strong serving off the bench, helping Serbia to a five-one run to take the set 25-21, one apiece.

The third set was a see-saw battle with Fukuzawa attacking well early for Japan, but Atanasijevic countered with his third ace to even it at 9-9. But Japan had a short run after that to go ahead 15-10 capped by a stunning Yusuke Ishijima block on Atanasijevic. But he in turn was stuffed by Mihajlo Mitic twice in a row as Serbia took seven of eight points to edge back ahead 18-17. Ishijima was the game changer late on, with a pair of spikes that set up Fukuzawa to close with an ace, 27-25, edging ahead two sets to one.

Uros Kovacevic came in to attack well for Serbia in the fourth, and Atanasijevic’s fifth ace put them up 12-8. Three hard spikes from Atanasijevic late pushed Serbia out to 23-17, and they closed a relatively easy set from there 25-19 to force the tie-break.

In the final set, Serbia’s southpaw Uros Kovacevic gave his side a boost with a hard spike to the chest of Japan’s Ishijima to go ahead 8-5. And Serbia would not be caught from there, with Kovasevic looking sharp in the role of closer with his 12th score giving his side the set 15-12, and the match.