Cuba routed Peru in straight sets (25-19, 25-21, 25-15) on the second day of action in the FIVB Women's World Olympic Qualifying Tournament at Tokyo Metropolitan Gym on Sunday. 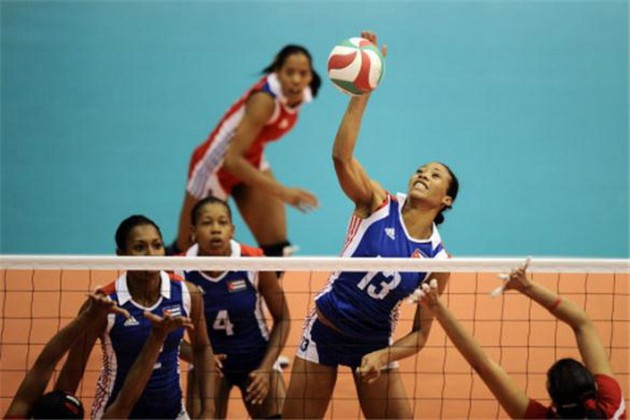 A day after losing in straight sets to Korea, Cuba came out with renewed intensity and was aggressive from the outset. Peru had major problems with communication in defense and appeared lethargic throughout the match.

Cuba’s Wilma Salas powered a spike to make it 5-5 early in the opening set. Cuba led 8-7 at the first TTO. A service ace by Santos made it 9-7. With Cuba leading 14-10, Peru called a timeout. Another spike by Cuba gave them a 16-12 margin at the second TTO. A reception error by Clarivett Yllescas made it 18-12 for Cuba and Peru took another timeout. Yoana Palacios leaped high to hammer a spike for 19-13. A block by Peru’s Uribe took the count to 23-16. Salas drilled a spike to give Cuba set point at 24-17 and they took the set 25-19 on another Salas blast.

Peru jumped out to 5-2 lead in the second set and Cuba called a timeout. Uribe spiked off a nice option play to send the South Americans into the first TTO with an 8-7 edge. A spike by Yolana Palacios moved Cuba in front for the first time at 9-8. Peru moved back in front at 12-11, but Palacios soared for another spike to equalize.Back and forth it went, with Carla Rueda’s spike give Peru a narrow 16-15 lead at the second TTO. A block by Rosanna Giel knotted the score 18-18. A reception error by Peru made it 22-20 for Cuba and they made it 23-20 on a smash by Salas. Cuba took the set 25-20 on an unforced error by Peru.

Yusidey Silie’s spike spotted Cuba to a 5-2 lead in the third set. Facing a 6-2 deficit, Peru called a timeout. Rueda misplayed a service reception and Cuba was up 8-3 at the first TTO. A Salas block made it 10-3 and Peru was clearly reeling. After conceding another point, Peru took another timeout. A net infraction by Peru took the score to 13-5. Uribe’s block pulled Peru within 13-7, but then Salas placed a sublime dink. Cuba led 16-10 at the second TTO. Giel spiked right down the middle to make it 17-10. Cuba went up 21-15 on a spike by Salas. A block by Santos moved Cuba within two points of the win at 23-15. Gyselle’s Silva’s spike finished it at 25-15.