Thailand surprised European champions Serbia with a straight-sets victory (25-19, 25-17, 25-20) on the second day of action in the FIVB Women's World Olympic Qualifying Tournament at Tokyo Metropolitan Gym on Sunday. Both teams have a 1-1 record. 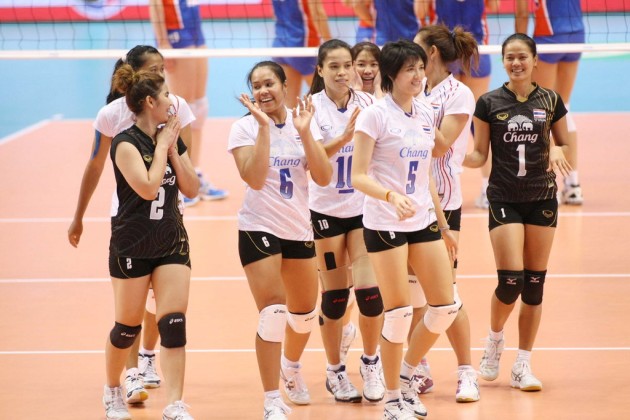 Serbia held a 13-6 advantage in the blocks category but Thailand led 9-3 in serving aces.

The Thais displayed great energy and organization on the way to the surprise victory, blocking and serving strongly. Serbia appeared to come out flat and never got going, committing several unforced errors.

Thailand moved out to a 5-2 lead at the outset of the opening set following a spike by Kanthong and Serbia called a timeout. Milena Rasic delivered a spike for Serbia following the break to make it 5-3 and the Europeans equalized at 5-5 shortly thereafter. A poor serve by Jovana Brakocevic gave Thailand an 8-7 lead at the first TTO, but a dink by Jovana Vesovic leveled the scores at 11-11. With Serbia up 13-11, Thailand took a timeout. An Onuma spike tied the seesaw affair again at 14-14, but Serbia led 16-15 at the second TTO following a reception error by Thailand. A service ace by Onuma put Thailand in front 18-16, while a spike by Kanthong made it 20-17 and Serbia called a timeout. Wilavan’s spike made it 22-19 as Thailand closed in on the set. She followed with a nifty dink for 23-19. A misplayed reception error by Serbia gave Thailand setpoint and they finished it 25-19 with a spike.

Serbia was in front 8-6 at the first TTO, but the two sides remained close until a reception error by Serbia gave Thailand a 12-9 edge. An Onuma spike put Thailand ahead 16-10 at the second TTO. A beautiful reverse dink by Tomkom Nootsara made it 17-11, while Hyapha Amporn placed a crosscourt spike perfectly off an option play to put the Thais 20-15 up. At 22-15, Serbia took a timeout. A spike by Onuma gave the Thais setpoint at 24-16 and they took the set 25-17 on a spike by Thinkaow.

The third set went back and forth early on with Thailand going up 5-4 on a block by Hyapha and 8-5 at the first TTO. Thailand called timeout at 9-7. Tijana Malesevic sent a spike long to put Thailand up 13-8 and Serbia called a timeout. Thailand was up 16-10 at the second TTO. An Onuma spike made it 21-15 as Thailand edged closer to taking the match. Serbia took four of the next six points to close to 23-19, but Thailand ended it 25-20.