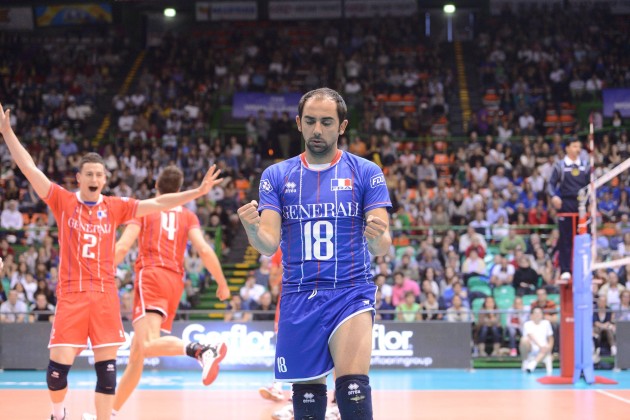 The match begun with three consecutive French blocks, some José Trèfle attacks and many Korean errors as the European side took an immediate lead. The five-point gap at the first technical timeout improved to 16-9 mid-set before some further kill blocks that closed out a sleepy looking Korea side 25-18.

The second frame was a much more balanced affair thanks to an improvement in Korean setting. From then the French middle blockers’ job became harder. However France remained ahead until 24-23 when, tasting their second straight set, an incredibly Pierre Pujol error allowed Korea to finally closed at 26-24.

The third set was again close, with both attacks working effectively. Once again, after the second technical timeout the French blocks created the gap between the two teams and Philippe Blain’s squad again took the lead in the match.

France responded well to open the fourth four points ahead at the first technical time out, but six Korean points in a row turned the tables as the Asian side led 12-10. The gap grew little by little to six points. The French blocks lost their strength and libero Jean-Francois Exiga began to tire as Korea to the match to a tie-breaker.

In the fifth set, nothing could stop the French, especially Samuele Tuia who scored two points more gifting the victory to his team.

Park Chul-Wo was the best scorer of the match with 23 points for Korea against his name, while Samuele Tuia scratched 19 on his tally for France.

FIVB W: Russia and Japan are the only undefeated teams