FIVB W: Russia and Japan are the only undefeated teams

World champions Russia and hosts Japan improved their win-loss record to 2-0 with six full points at the conclusion of Day Two of the FIVB Women’s World Qualifying Tournament at Tokyo Metropolitan Gymnasium on Sunday. 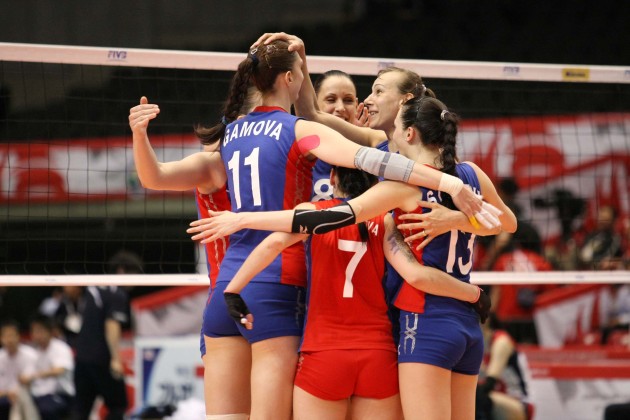 The top-three sides at the end of the eight-team round-robin event plus the best Asian team will earn tickets to the female volleyball tournament of the 2012 London Olympic Games.

“I’m very happy for this result”, Russia’s coach Sergey Ovhinnikov stated. “We had problems in the second and third sets, but we solved them. I thank the players for this important victory.”

“We are relieved to win 3-0 but still need improvement in certain areas”, Japan’s coach Masayoshi Manabe commented. “We would like to work on those areas before our next match.”

In other matches on Sunday, Thailand and Cuba evened their win-loss record at 1-1 following their outings against Serbia and Peru respectively. Korea and Serbia are also at 1-1 while Peru and Chinese Taipei dropped to 0-2.

“It was a hard game for us because we had lost to Russia yesterday so we had to regroup”, Thailand coach Kiattipong Radchatagriengkai said. “I spoke to my team and they followed the game plan well. I am very satisfied.”

“Our team was able to recover from the loss yesterday”, Cuba coach Juan Carlos Gala expressed. “We were aggressive today and followed our tactical plan. Our blocking was important and the key to victory today.”

Monday will be the first of two days of rest during the course of the competition. The action resumes on Tuesday with Chinese Taipei against Peru, Cuba playing Russia, Korea facing off Serbia and Japan meeting Thailand.