Last year’s winners of Slovakia will be starting on Thursday in Katerini, Greece, their ninth campaign in the CEV Volleyball European League and even though some starting players will be missing the competition, the goal of the group mentored by head coach Stefan Chrtiansky remains to make it to the final four that is scheduled for late June. Only three players who had joined the Olympic qualifier completed some ten days ago in Sofia will be part of Slovakia’s roster for the European League. 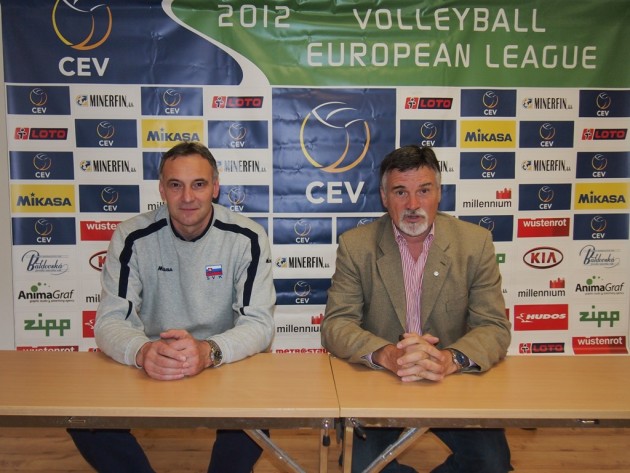 With Tomas Kmet, Emanuel Kohut, Michal Masny and Lukas Divis having all decided to take a break from the national team, Slovakia will be also missing Frantisek Ogurcak, Peter Michalovic and Jozef Piovarci who are nursing injuries at the moment. “We knew that some players would have skipped this competition and this was already foreseen in our negotiations” said head coach Chrtiansky in Bratislava. “On the other hand, some other guys who were expected to join the group are struggling with injuries and so only Branislav Skladany, Stefan Chrtiansky and Robert Hupka remain from the roster that we had lined up in Sofia only a couple of weeks ago. Via the first round in Greece we will see what we can reasonably achieve this year even though our goal remains to qualify for the final four” he added. Right for the first round of action in Katerini Radoslav Szaraz and Tomas Halanda will make their debut with Slovakia’s senior national team.

Slovakia will be hosting the last round of action in Pool A in late June with the magnificent “Steel Arena” in Kosice, venue of last year’s final four, hosting the matches. “We know that Spain will be playing with all of their best players apart from Oscar Sevillano who got injured in Sofia. I hope that some of the players that are currently injured will come back to the group in due time, especially for our home round in Kosice. After Slovakia won last year’s final with Spain, we are looking forward to some more great matches against the Iberians” stressed Chrtiansky. As for Greece, he will be profiting of the info provided by his assistant Andrej Kravarik, a real legend there after spending the last 15 years in the Hellenic national league playing for Iraklis THESSALONIKI and being named MVP last season. “This group has a good potential and these guys can play good Volleyball. They have to know that throughout this campaign they will be representing Slovakia internationally” said Kravarik.

The President of the Slovak Volleyball Federation, Lubor Halanda, feels that qualifying for the final four would be a great result for such a young group that includes his son Tomas, a 20-year old spiker who is following in the footsteps of his father but so far never played for the senior national team. “Even though we want to provide our young players with some valuable experience on the international arena, we still want to remain competitive. We know the winner of the European League will be playing the intercontinental qualification round for the 2013 FIVB World League like we did last year with Canada but with this group I think this is an unrealistic goal this time. We nevertheless hope for the best and are curious to see how these guys will perform” stated Halanda – who is also a member of the CEV Board of Administration – at a press conference in Bratislava.