The Imoco volley late in the evening has closed the deal for the purchase outright of Cristina Barcellini spiker of Asystel Novara, the former Italian national. 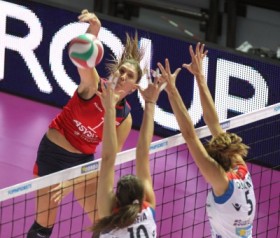 Born in Novara November 20, 1986, Barcellini has behind her a rich career, which began in 1999 in Volleyball Bellinzago, Series D. In 2003 he was hired by Asystel Novara, where he became captain, and with whom she won the League Cup in 2007 and the CEV Cup 2008/2009, being named best player in 2009 called for the first time in National, taking part with the shirt blue Montreux and the Universiade tournament, winning one silver and one gold. Another gold arrives, always with the blue shirt, in the Grand Champions Cup in 2010 with the National Barcellini won the bronze at the World Grand Prix, while last year the highest podium in the World Cup.

“Being able to bring Cristina Conegliano is a major effort by Imoco Volleyball. And we wanted to make a gift to our fans on all our territory,” declared Peter Garbellotto and Peter Male, vice president and president of Imoco Volleyball.

ITA W: Modena completed the technical staff, the point on the market