Katerini, a town located in Central Macedonia and the capital of Pieria regional unit, is ready to host the national teams of Greece, Slovakia, Spain and Israel, for the first round of action in Pool A of the 2012 CEV Volleyball European League – Men. 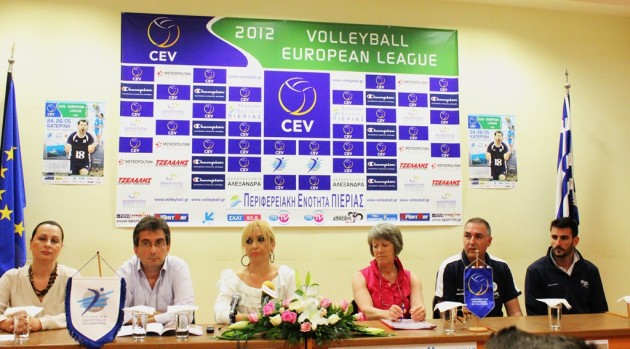 The local organizers hosted on Wednesday a press conference and wished everyone involved all the best for the upcoming matches.
On behalf of the Hellenic Volleyball Federation, George Manolopoulos, President of the National Teams’ Committee, said: “I would like to thank the Pieria region and Mrs. Mavridou for all their efforts and help in staging this round of the competition. The aim of the federation is to spread Volleyball across all of Greece’s regions, especially where Volleyball teams stopped playing a while ago”.
CEV Supervisor and President of the European Cups Commission, Mrs. Riet Ooms, added: “The CEV is very happy that this year Greece is taking part in the European League with two teams even though this country is being confronted with a very difficult economic situation. It is very important that Greece decided to join the European League once more because if you stop for one year, then it’s very difficult to come back. The CEV Volleyball European League is important for two reasons: you can test out your status and skills by playing against good teams and you have got the opportunity to make a first step to join the FIVB World League, at least as far as the men’s division is concerned. I also would like to thank the Pieria regional unit for hosting these matches as I understand that the circumstances are really difficult here. Finally, even if I have to be neutral, I still cross my fingers hoping that Greece will deliver a good performance this weekend here in Katerini”.

The head coach of the Greek team, Alekos Leonis, said: “Even though we have a lot of problems to deal with (yesterday our young opposite George Tzioumakas got injured), we promise that we will fight with all our forces against very strong teams such as Spain and Slovakia”.
Greece’s captain Nikolaos Smaragdis concluded: “We thank the Greek federation for their efforts to make sure we can participate in such a prestigious competition despite all the problems they have to deal daily with”.