The junior women’s team of Maritza PLOVDIV claimed the national title of Bulgaria in their age category for the first time since 1997. The young yellow team made its way through to the final match without losing a single set throughout the entire season, but then it had to face a tough challenge in the decisive battle for the crown. In a packed Arsenal hall in Kazanluk where the National Finals took place, Maritza overcame incumbent titleholder CSKA SOFIA by 3:2 (25-21, 19-25, 17-25, 25-16, 15-11) to triumph as the new champion of Bulgaria. 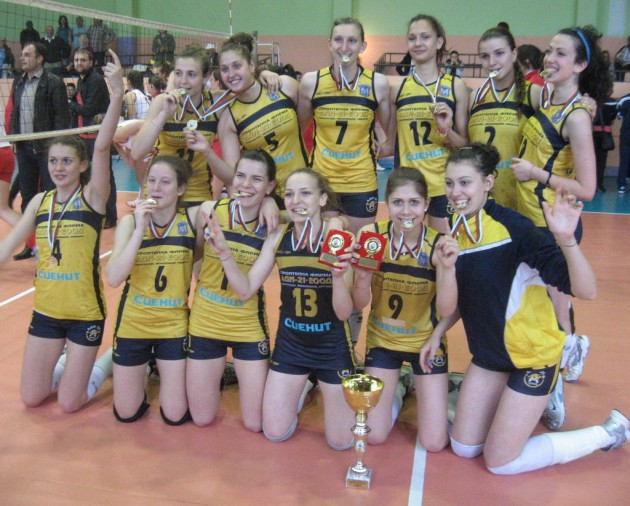 With 9 kill blocks for a total of 22 points for Maritza in the final game, Mira Todorova became the top scorer of the match and was also honored as Best Blocker of the tournament. Teammates Velina Kansuzova and Kristina Guncheva also received individual awards – for Best Libero and Best Setter respectively. VC Maritza President Iliya Dinkov was also present at Arsenal hall to cheer the “Yellows” on to the title and personally awarded them with the cup and the gold medals during the ceremony after the final match. CSKA opposite Veselina Grigorova, a representative of the Kazanluk volleyball hatchery, was honored as tournament MVP to the great satisfaction of the local crowd on the stands, while her teammate Simona Dimitrova took the Best Spiker award. Levski Volley SOFIA setter Petya Barakova was declared Best Server. Her team had claimed the bronze medals by defeating Spartak 96 PLEVEN 3:1 (25-18, 18-25, 25-14, 25-17) in the third-place final.

”I am so happy, I am speechless,” a very emotional Maritza head coach Ivan Radichev said after the final match. “I am grateful to the entire staff of our club that made this success possible. I am thankful to our fans who traveled from Plovdiv to support us. We are one great big team and I am happy to have been a part of it for the past two years. We won this final because we were well prepared for it and we wanted it so much. We are already thinking about our next challenges – the national finals for youth and for under-15 girls, hoping to repeat our achievement there.”