As the men’s national team is joining the first round of action for Pool A in Katerini, Greece, the 2012 CEV Volleyball European League somehow got started also in Spain as a press conference was held on Thursday in Teruel, venue of the home leg for the group that recently competed at the Olympic qualifier in Sofia. 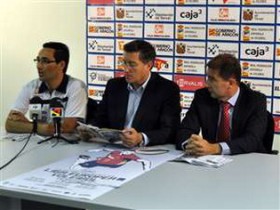 The “Los Planos” sports hall played host to that media event that as attended by the Lord Mayor of Teruel, Manuel Blasco, by the Secretary General of the Royal Spanish Volleyball Federation, Juan Pedro Sanchez, the club President of Caja 3 TERUEL, Jose Luis Toran, as well as the Delegate of Sports from the Government of the Province of Aragon, Mr. Miguel Pantoja.
All authorities expressed their satisfaction as Spain’s national team is returning to Teruel for an event which is of a great significance for the Spanish Volleyball family.

“To host matches of the national team here in Teruel is a great joy for us” said club President Jose Luis Toran. “We always support the activities of the national team and we were lucky to have the group here twice in the past couple of years as they were preparing their campaign for the European Championship and the Olympic qualification” he added enthusiastically.

“Teruel is the perfect venue for this home round in the European League; there is a long tradition in Volleyball here in Aragon and this is the best pre-condition to have an excellent return in terms of attendance at the matches” stressed the Secretary General of the Spanish Volleyball Federation, Juan Pedro Sanchez Cifuentes.

Teruel will host the second round of action in Pool A through this coming June 1-3, with the local heroes being joined by the national teams of Greece, Slovakia and Denmark (Israel will be resting on that weekend). As they all embark on their quest to make it to the final four, the matches will be more than interesting for all Volleyball fans. “We are happy to welcome all participants to Teruel and we want to re-assert our commitment to fully support the local Volleyball club as well as the national team” concluded the Mayor of Teruel, Manuel Blasco.

FIVB: Why volleyball and beach volleyball will increase in popularity