After they had downed the hosts of Greece in straight sets on Thursday, last year’s silver medalists from Spain extended their good record in the first weekend of action for Pool A of the 2012 CEV Volleyball European League as they edged the 2011 champions of Slovakia with the score of 3:1 (25-20, 19-25, 25-19, and 25-21). 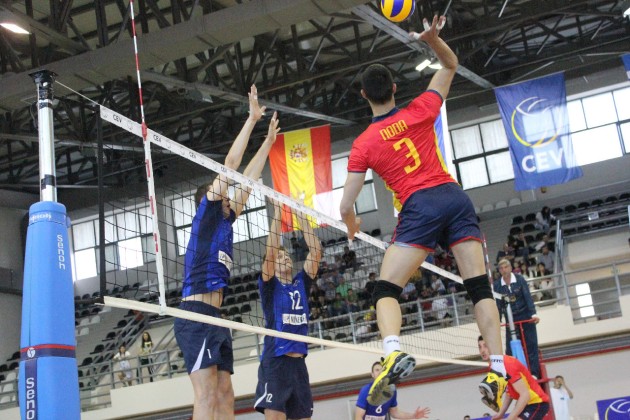 Spain was anchored by three players who finished the game in double digits, namely Iban Perez (17), Sergio Noda (16) and Jorge Fernandez (15) while Slovakia killed a total of 8 blocks but could not resist to the great performance displayed by the Iberians. Spain gradually opened a gap of 4 points in all three sets that it eventually seized while Slovakia impressed the audience by imposing its pace in the second set, comfortably going up there 8:1 and 19:12 before finishing it off with a 25-19.

“Slovakia played good in attack and blocking and they also have 3 or 4 players who have been serving pretty strong. It was a difficult win for us and tomorrow with Israel it will be a totally different match and story. I believe that Israel tonight will be playing better than they did on Thursday with Slovakia and tomorrow they will step up once more the quality of their performance” said the head coach of Spain, Fernando Munoz Benitez. “After finishing second last year we really want to win the title this time but I know this will be difficult” stressed Spain’s star Iban Perez.

“We lost and so I cannot be 100% satisfied but nevertheless there are some positives that I can take from this game” stated Slovak head coach Stefan Chrtiansky. “Spain has got the experience and quality to set the pace of the game and control the score” he added.

After losing on Thursday to Spain in straight sets, the home guys of Greece got back on track as they scored their first win in this year’s European League by downing Israel 3:0 (26-24, 25-20, and 25-19) for the joy of some 850 fans in attendance tonight in Katerini.

The turning point of the match came in the last and deciding phases of the opening set as Israel was up there 22:19 but Greece stormed back with a couple of blocks sealed by George Petreas and Christos Belos to go for the 24 all; after a mistake made by the Israelis, Greece’s Costas Stivachtis scored an ace to seal this section of the game (26-24). After that, Greece comfortably controlled the match for the next two sets and its leadership was never in danger. Petreas and Belos top scored with 14 and 12 points respectively, while Dimitris Soultanopoulos helped his side with 4 blocks.

“The crowd was just fantastic. After flipping the score around in the first set everything went easy for us as we gradually found our rhythm of play” said Christos Belos. “This is a very important win for this young team and our fans helped us a lot tonight. We displayed some good play in defense and behind the serving line as well, so this resulted into this win in straight sets” added head coach Alekos Leonis.

“We made many mistakes as we had done yesterday while playing Slovakia, especially with our service” admitted Israeli head coach Zohar Bar Netzer. “We could not react after losing the first set that badly. Tomorrow we play Spain which is evidently the strongest team of the Pool, I do not care about the result but I just want to see a good performance delivered by my players”.