Korea bested Thailand in straight sets (25-18, 25-22, 25-20) on the sixth day of action in the FIVB Women's World Olympic Qualifying Tournament at Tokyo Metropolitan Gym on Saturday. 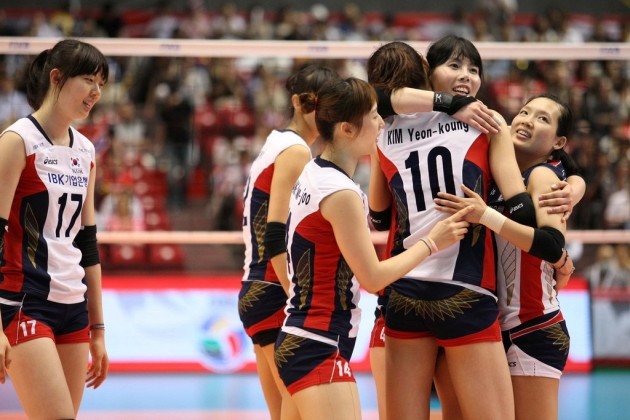 Korea, who play Peru on Sunday, improved to 4-2 with the victory, while Thailand fell to 3-3.

Superstar Kim Yeon-Koung was again the driving force for the Koreans, scoring a match-high 23 points in the triumph. Han Song-Yi chipped in with 11 points in the win.

Korea did an especially good job on reception during the match, as Thailand kept the pressure on the entire way.

Thailand was undone by several unforced errors during the course of the contest finishing with 21 against just 8 by Korea.

Kim Yeon-Koung made one big play after another for the victors, seemingly always in position with a crucial spike or block.

Korea established a 6-4 lead in the second set. Jung Dae-Young‘s spike made it 7-4. A service ace by Thinkaow brought Thailand within a point at 7-6. Korea was up 8-7 at the first TTO after a dink by Han Song-Yi. A reception error by Korea evened the score at 9-9. Kim Yeon-Koung gave Korea an 11-10 lead with a spike. Thailand took the lead 12-11 on spike by Thinkaow. Han Song-Yi fire a spike long and Thailand moved in front 14-12. Thailand led by a point at 16-15 at the second TTO after a spike by Sittirak. Korea moved ahead 18-16 on a dink by Kim Yeon-Koung. Kim Yeon-Koung’s spike made it 20-19 for Korea. Thinkaow‘s block equalized at 21-21 and smash by Apinyapong Wilavan gave them a 22-21 lead. Korea then retook the lead on a Kim Yeon-Koung spike at 23-22. Hwang then placed a perfect dink and Korea had set point at 24-22. Hwang‘s spike gave Korea the set 25-22.

Korea took a 6-3 lead in the third set and Thailand called a timeout. Hwang‘s service ace made it 8-4 for Korea at the first TTO. A block by Sittirak pulled the Thais within two at 8-6 and Korea took a timeout. Thailand evened the score at 8-8 after a net infraction by Korea and took a 9-8 lead on a spike by Sittirak. Kim Yeon-Koung‘s spike moved Korea within two at 12-10. A block by Korea tied it 13-13. Kim Yeon-Koung sent a serve wide and Thailand led 15-14. Apinyapong‘s spike made it 16-14 for Thailand at the second TTO. Kim Yeon-Koung knocked down Apinyapong with a spike to make it 18-18. Sittirak missed a spike and Korea move up by three at 21-18. Kim Yeon-Koung crushed another spike and Korea was two points from the match at 23-19. Kim Yeon-Koung spiked once more and it was match point at 24-20. The match ended 25-20 on a reception error by Thailand.