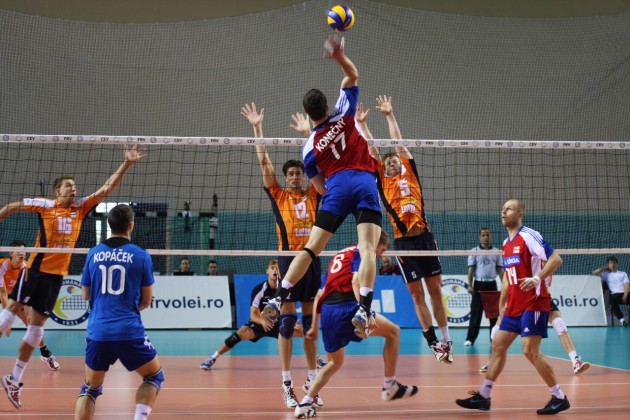 Actually the Netherlands had caught a very good start, playing aggressively and shaking the Czech defense with the attacks killed by outside hitter Jeroen Rauwerdink while Wytze Kooistra quite regularly stopped the Czech spikers with his block. The “Oranjes” dictated the pace of the game (8:4, 16:10) even though the Czech Republic tried it hard to respond, especially via wing spiker Karel Linz. The Czech guys were somehow surprised by the speedy rhythm imposed by the Netherlands and after some more attacks by Rauwerdink, Jelte Maan aced for the final 25-17.

The Czech machine that had totally downed Turkey and Romania in the previous matches started working much better in set 2 with Linz and opposite David Konecny contributing the provisional 8:4 on the scoreboard. Setter Ondrej Boula well mastered his offense so that the Czechs cruised away for a massive 16:7 at the second technical time-out. Ales Holubec and Vladimir Sobotka stood out with their double block with the set ending in a quite eloquent 25-12.

The always solid reception of Karel Linz paved the way for great actions in set 3 as setter Boula split his options between Konecny and Holubec, with the Czech Republic taking the lead at both technical time-outs (8:6, 16:12). Rauwerdink and Maan attempted a comeback for the “Oranjes” but the Czechs did not look back and Konecny sealed the final 25-19.

The Czech show continued also in the fourth set where Holubec and Sobotka crashed the Dutch hopes with their gigantic block while Konecny and Linz scored with great consistency. Rauwerdink and Maan tried to take their side by the hand but they quickly trailed in the score (8:5, 16:11) and after the second technical time-out it was an all Czech affair with Konecny that put an end to the match at 25-18.