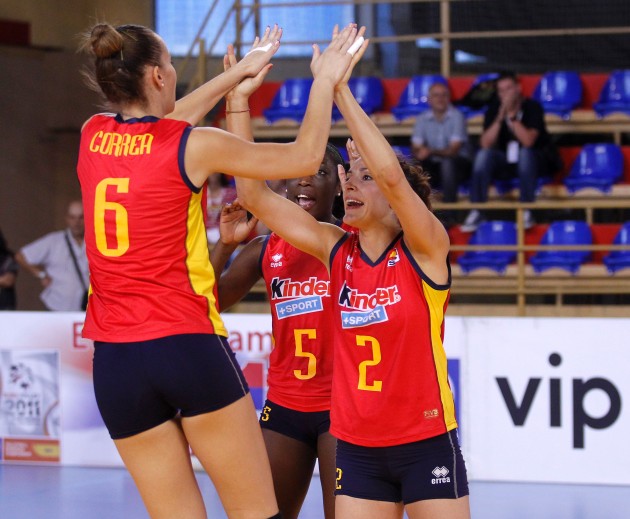 Spain started with a very good pace and claimed the first set quite comfortably, as the players coached by Francisco Manuel Hervas imposed their pace right from the opening phases with their service, while Hungary committed quite many mistakes. Spain claimed 7 set balls and the second one was eventually exploited to wrap it up at 25-18.

Set 2 developed in a completely different way, as Hungary stood out in all fundamentals going up 21:16 as the final rush was quickly approaching. Milagros Collar clawed back for Spain (21:20) and Hungary’s head coach Zoltan Jokay stopped the game thereby calming his girls down with Rita Liliom eventually scoring the next rallies to go for the 1:1.

Hungary stretched that good momentum also to the third set (14:11) but Spain gradually stepped up to claim the deciding points and pocket that section of the game with the score of 25-21. Head coach Hervas found the right options right after the second technical time-out as setter Patricia Aranda focused on her middle blockers to find the way through the Hungarian block and defense system. Afterwards Spain totally dominated the scene in set 4 going up there 21:8, and a couple of aces scored by Aranda finished it off for the final 3:1.

“We started well but then we had too many ups and downs. Anyway, I am satisfied with this win and I think that in the next rounds we can play even better than we did here in Subotica” said Spain’s head coach Hervas after the game.

“I am satisfied with the performance of my players in the first two sets, especially with what we did in reception. Afterwards, we ran out of fuel and we totally surrendered in the last set. Next week we play at home and our minimum goal is to win at least one match” said Hungary’s mentor Zoltan Jokay.