Serbia routed China in straight sets (25-15, 25-13, 25-21) to remain unbeaten on the third day of action in the FIVB Men's World Olympic Qualifying Tournament at Tokyo Metropolitan Gym on Tuesday. 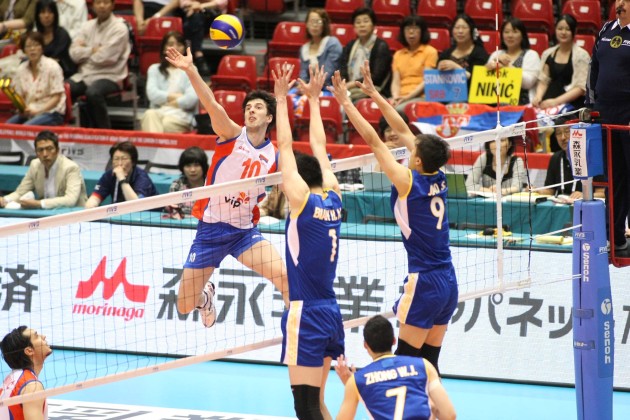 The victory raised Serbia‘s record to 3-0, while China fell to 1-2.

It was a clinical performance by Serbia, as they overwhelmed their opponents with power on both offense and defense.

China had difficulty blocking against the Serb attack.

Serbia jumped to a 6-2 lead in the second set following a spike by Sasa Starovic. Chen Ping sent a spike long at Serbia was up 8-3 at the first TTO. A service ace by Dragan Stankovic made it 14-7. Chen’s spike made it 15-8. A spike by Kovacevic put Serbia on top 16-8 at the second TTO. Chen’s serve went long and Serbia had a nine-point lead at 20-11. A spike by Serbia made it set point at 24-15 and they took the set 25-15 on a spike by Nikic.

Shen Qiong sent a serve long and Serbia took a 5-4 lead in the second set. A soaring spike by Starovic made it 7-4 for Serbia and China called a timeout.A spike by Nikic saw Serbia up 8-5 at the first TTO. A block by Starovic put Serbia up by five at 11-6 and then Nikic followed with a service ace. Nikic smashed a spike down the middle to make it 15-7 for Serbia. It was 16-7 Serbia at the second TTO. Bian Hongmin sent a spike into the net to give Serbia a 20-9 advantage. Zhang Chen sent a spike long and Serbia had set point at 24-13. Serbia took the set 25-13 with a service ace from Mihajlo Mitic.

A spike by Podrascanin staked Serbia to a 5-1 lead in the third set. Another Podrascanin spike took it to 7-3. Kovacevic‘s spike made it 8-4 at the first TTO. A spike by Zhang pulled China within two at 9-7. Podrascanin’s spike made it 15-12 and Serbia was on top 16-13 at the second TTO on a spike by Milan Rasic. Kovacevic rose up for another spike and it was 20-16 as Serbia drove toward the finish line. A service ace by Chen Ping pulled China within one at 20-19 and Serbia took a timeout. Chen then fired a serve into the net for 21-19. Rasic’s block made it match point for Serbia at 24-21 and Nikic finished it with one more blast.

Serbia play Australia on Wednesday, while China line up against Japan.

The final match on Tuesday will see Japan battle Korea.

CHN M: Instead of Russia, Kurek to...