WGP W: Terzic emphasizes strength of team ahead of Poland clash in Lodz

Serbia coach Zoran Terzic has explained, despite his side missing some big names, it is still the strongest possible ahead of Serbia’s important opening 2012 World Grand Prix encounter against host Poland in Lodz on Friday. 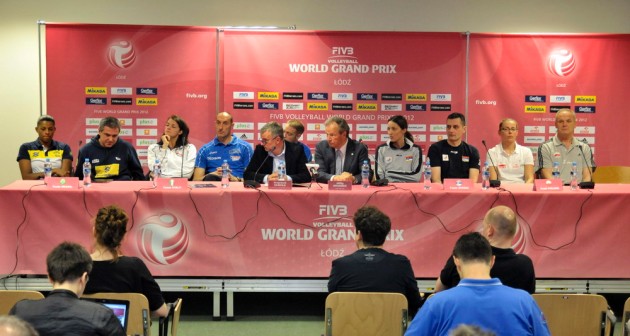 Last year’s bronze medallist’s qualified for the Olympic Games by finishing third at the Women’s World Olympic Qualification Tournament in Japan last month however Terzic stressed at the pre-weekend press conference that his squad has been hit by injuries but is still the best possible.

“We like playing in Poland, I think it is one of the best countries to play in, because of the really amazing atmosphere and Polish fans, who cheer no matter if Poland is playing or not,” Terzic said “For us this competition is very important for two reasons: first – of course we try to prepare the team for the Olympic Games and the second – we would like very much to repeat the result from the last year, when we took third place. Some of my players are not ready to play yet, we hope some of them will be ready for the next weekend. If not – definitely for the Olympic Games. Right now the situation is very, very bad. Of course I want to emphasize that for this moment the best players in Serbia are here with me, this is the best team.”

Friday’s match will be the fourth time the two countries have clashed in an FIVB international event but the first time in the World Grand Prix. Serbia lead the overall head to head 2-1 including wins at 2010 and 2006 World Championships. Poland won at 2007 World Cup. Serbia also beat Poland at last year’s European Championship quarterfinals, which Serbia went on to win. Overall including the European Championships Poland lead 9:4 dating back to 1951 but Serbia’s four wins come in last six matches.

“We are very happy to play for the second time in our carriers in the World Grand Prix,” Serbia captain Maja Ognjenovic added. “We are not complete yet, but I hope that we will give our maximum, because we will play against very strong teams of Brazil, Italy and Poland.”

“I am extremely pleased that we can play against such strong opponents,” Poland coach Alojzy Swiderek. “I want to emphasize that all the other teams have the Olympic qualification. We were one little step from that, but unfortunately this year we won’t be going to the Olympic Games. Because of that this tournament is truly important for us, because it is our last tournament of the season. We want to make a great performance in this tournament, also in the next two, maybe three, because we are hoping for the Finals.”

“There are great, strong teams here in this tournament, we all know that this is the world’s top,” Poland captain Katarzyna Skorupa said. “We are glad that we are here in Lodz, in front of our audience and I hope we will be able to fight on a good level.”
In the earlier game in Lodz, World Cup winners Italy take on eight-time champions Brazil. The two volleyball superpowers have met a total of 27 times with Brazil having won 20 times, including four of the last five but Italy won the last match between the two 3-0 at last year’s World Cup. In the World Grand Prix, Brazil hold a 14:4 advantage.

“For us it is a great challenge because we have three top teams on the other side and difficult matches ahead, but we will try to do the best that we can,” Brazil coach José Roberto Guimarães said. “I divided my team in half – my strongest players stayed at home to practice and some came here. It is due to the traveling and time differences – it destroys my team. Until the end of this month we have three tournaments, then the Olympic Games, so there is not much time to prepare. We’ve decided to have two separate groups. Next week in Brazil you will see the rest of my team.”

“It is the first official competition for this team and it will be difficult, but we will show our best in this round, then the second round and hopefully in the Finals,” Italy coach Marco Bracci, who is in place of regular coach Massimo Barbolini who is absent due to family reasons, said.

Brazil captain Fernanda Rodriguez added: “It is a big challenge for our team. We have here four top teams and we want to have the best performance.”

While Italy captain Serena Ortolani said: “My team is a mix of both young and older, more experienced players, so this tournament will be an interesting test for us.”

IRN M: Another Montenegrin in Iran