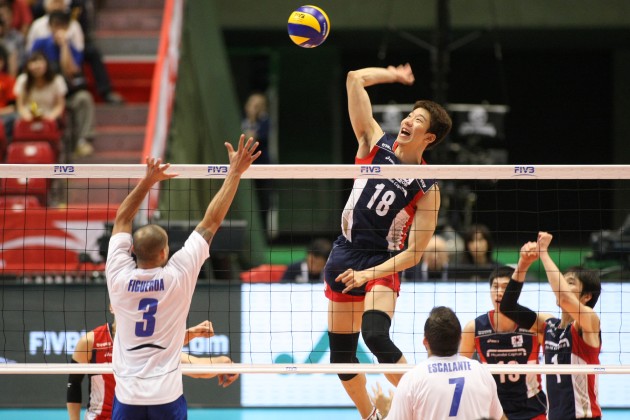 Both teams came out positively. Cruz made a good early contribution with three solid hits, while Choi Hong-Suk delivered a big shot for Korea. Puerto Rico captain Jose Rivera came up with a hefty spike and a great block on Kim Yo-Han to make the score 11-8, prompting Korea coach Park Ki-Won to call a timeout. Puerto Rico kept the pressure on and were four points ahead at the second technical timeout, before Korea clawed two points back and Puerto Rico coach Carlos Cardona took his players off court for a talk. Two dropped points later, Park had his players on the sidelines again. Korea were being hurt by poor reception and when they faced the booming serves of Enrique Escalante, they had no answer. Puerto Rico scored the last seven points of the set, six behind the serving of Escalante. The final two were aces.

Jeon Kwang-In and Kim helped Korea to an 8-6 lead at the first TTO of the second set, but blocks by Roberto Muniz and Cruz pulled the teams level at 8-8. Cardona called a timeout at 8-10, which had bad consequences. Puerto Rico were then penalized for three successive positional errors, which cost them three points, and had the added penalty of a yellow card for dissent. So they found themselves trailing 14-8, and there was no way back for them after that. Lee Sun-Kyu hit a shot down the middle to bring up setpoint and a hit by Choi drew the teams level at 1-1.

Cardona called a timeout after three errors saw his team go 5-1 down in the third set and his team rallied behind the serving of Cruz and a couple of Korean mistakes. After Choi and Figueroa traded missiles and Kim hit the net, the scores were level at 6-6. Puerto Rico edged ahead after two straight blocks by Rivera on Kim, and Park called a timeout when his team fell 11-8 behind. Jeon tried hard to pull his team back into the game, but errors and poor serving saw them fall further behind and they were four points back at the second TTO. They weren’t helped by a yellow card and two good blocks by the Puerto Ricans. Park called a timeout after the second one – with the score at 23-17 – but another error brought up setpoint at 24-18. Rivera then hit the winner and Puerto Rico were 2-1 up.

Puerto Rico had the early advantage in the fourth set after a great spike by Cruz and a block by the same player on Lee. But then they made a few errors and allowed Korea back into the game, a wayward shot by Rivera drawing the teams level at 7-7. They were still level at 9-9, but three straight points by Lee opened up a three-point gap and Cardona called a timeout.  The margin was the same at the second TTO and the Puerto Ricans were struggling to find a way to break the Koreans down. Cardona called another timeout at 19-15, but the Koreans kept the pressure on and a terrific block by Jeon on Cruz brought the score to 23-16. Figueroa hit a shot long and Jeon made another hit, and the match was all-square at 2-2.

Korea took a small early lead in the fifth set and Puerto Rico had to play catch-up. But they managed that behind good attacking play from captain Rivera and Cruz. Korea’s coach called a timeout when Puerto Rico went ahead at 7-6 and Puerto Rico stayed a point ahead at the changeover. It stayed very, very tight. Korea got a break when Escalante failed to connect properly with a hit and he was blocked by Shin Yung-Suk to put Korea 13-12 up. Captain Kwon Young-Min then fooled the Puerto Ricans with a topspin serve that dropped in to bring up matchpoint. Cruz then hit a shot into the net and it was all over.