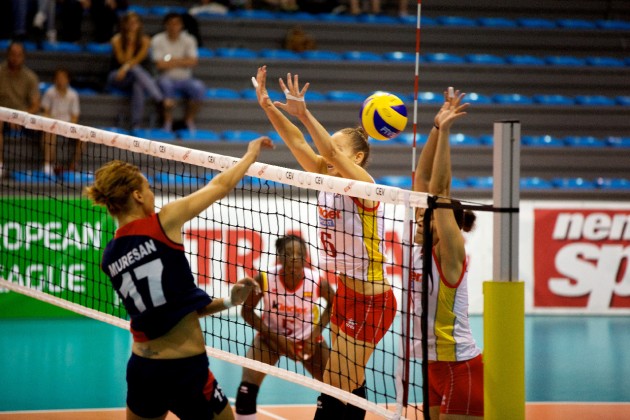 Actually Spain caught the best start by displaying a very solid offense that caused many problems to Romania’s defense line (8:5). Even though both committed many mistakes in the early phases of the match, the teams stayed concentrated and focused with Spain keeping a margin of 3 by the second mandatory stop (16:13). Romania’s head coach Atanas Petrov tried out many substitutions and his side eventually clawed back from 23:17 to 24:23, but it was Spain that scored the next rally for the provisional 1:0 (25-23).

The second set followed a similar plot with Spain moving to the front (9:8) as Romania’s Alexandra Kapelovies got a yellow card after quarreling with the first referee. A great fight unfolded as finally Romania got the lead (16:14, 19:17) before Daiana Muresan and Nneka Onyejekwe widened the gap by scoring the next couple of points (21:17), with the set being ended a few moments later by an ace of Denisa Rogojinaru (25-19).

Romania caught a flying start in set 3 (8:3) and even a time-out by Spain’s head coach Francisco Manuel Hervas could not stop that negative trend as his players made many mistakes in the next rallies, thereby paving the way with gold for Romania that eventually sealed a terrific 25-14.

Things did not change much in set 4 where Romania got to the front right from the start (8:3, 10:4 and 11:5); Spain scored a couple of points but Romania’s lead remained impressive by the second technical time-out (16:9). Spain fought back bravely but after drawing level at 20, Kapelovies and Ana Bianca Moldovan took their side by the hand to claim the final 25-21 and 3:1.

“Except for the first set we really controlled the game. I am happy not only with the result but also with what we showed in terms of quality and consistency” said Romania’s head coach Atanas Petrov.

“We played a great match but we could not keep up the quality of our game; I congratulate our opponents as they fully deserved to win” replied Spain’s mentor Hervas.

EL M: Israeli guys barely miss out on yet another sensation

Referee fell from his chair! (VIDEO)