For the eighth time in their history Bulgaria men’s team will participate in the Olympic Games. Radostin Stoytchev’s squad won the FIVB World Olympic Tournament in Sofia, Bulgaria, beating France, Egypt and Pakistan to clinch their Olympic Games ticket. 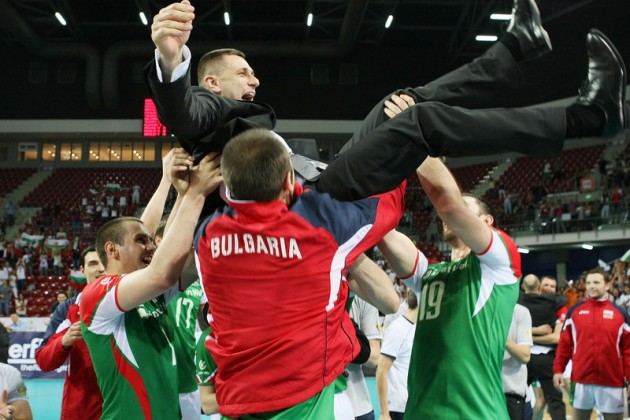 The final step was a victory over Egypt. 10,000 people in Armeec Arena Sofia cheered the Balkan Lions to defeat Pharaos 3-1 (25-16, 25-18, 20-25, 25-12). President of the State Rosen Plevneliev, vice Prime Minister Simeon Dyankov, Ambassadors and Members of the Parliament whitness so longed victory of Bulgaria.

Bulgaria coach, Radostin Stoytchev: “A dream comes true and a few people know that this victory was really suffered. I want to thank my assistant coach Camillo Placì and to say that our team deserved this victory. Thank you all, the players, the headquarters and last but not least the journalists but I am afraid I will forget someone so I apologize.”

Egypt coach, Elshemerly Sherif: “Bulgaria has a great team and I wish them good luck. I hope next time we will play better and will rebuild our team and get back to the position we deserve.”

Disappointed France defeated enthusiastic Pakistan in a 4 set match 1-3 (25-21, 20-25, 18-25, 13-25) but the Asian team got out of FIVB Olympic Qualification Tournament really happy because they have won their first set.

France captain, Pierre Pujol: “Pakistan played really well today. I saw all three matches of their team and every time they were so close to win a set and today they did it because they fought really well. For us it is the end and time to go home.”

Pakistan coach, Hussain Mazhar: “France is a really good team. It’s the first time that we are coming to a tournament like this and this means a lot of experience for our team. We played our matches well and did our best.”