Thousands of young volleyball players got together again in the huge, annual Power Cup tournament in the Finnish harbour city of Turku last weekend. This was the 28th edition of the internationally famous Power Cup. 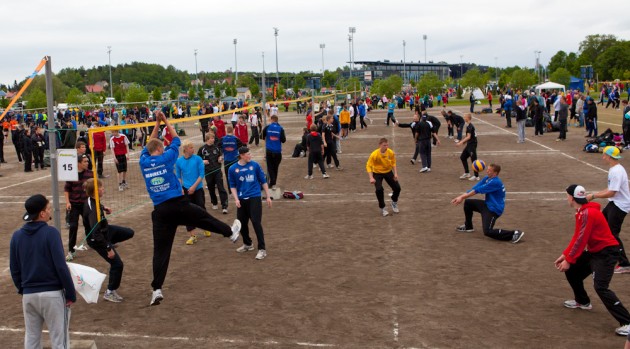 There were 826 teams playing in Turku of which almost 40 teams were from Estonia and Russia. All the other teams were from every corner of Finland, some of them even from Ivalo, Lapland, which is 1,100 kilometers away from Turku.

The tournament was played at the beautiful Kupittaa outdoor sports area, almost in the middle of Turku. The organizers built 256 outdoor playing courts for about 4,500 matches which were played over four competition days.

There were also other international, distinguished guests in Turku during the weekend. CEV Board of Administration had a meeting in Turku on Saturday and the Executive Committee met already a day earlier.

The CEV Board of Administration had time also to visit the Power Cup after the official meetings. On Sunday morning several of the Board members walked around the Kupittaa competition area to see thousands of kids playing volleyball.

“The ambiance is just fantastic” said CEV president André Meyer. “It is amazing to see so many children that enjoy playing volleyball that much. I think that Finland and the Power Cup shall be seen as a role model for Mass Volleyball, I haven’t seen anything like this anywhere else. I was also told that the organizers are being helped by more than 600 volunteers; this is absolutely impressive”

“I think that some other countries may well learn from Finland’s experience and organize something similar,” added the CEV president.

ARG: Meeting of coaches and officials in misiones