Austria’s national team will be playing its home round for the prelims of the 2012 CEV Volleyball European League this coming June 21-23 in Hard, for what is also the very last leg of the League Round, so the teams advancing to the finals scheduled for late June in Turkey are very much likely to be determined there. 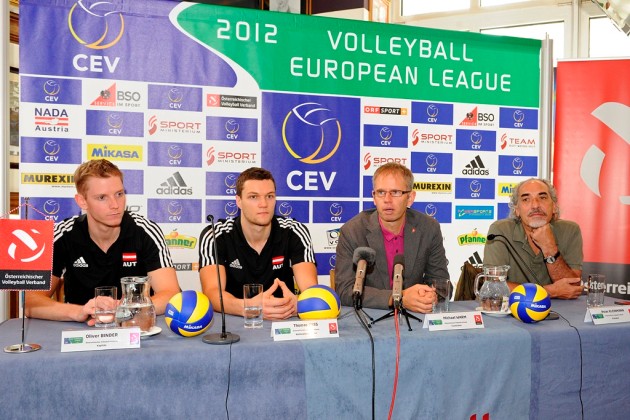 After resting in the opening weekend where the competition got started in Romania, Austria debuted a week later in Istanbul, scoring there two wins over Turkey and Romania and by stretching the match with the Netherlands up to the tie-break. All this was achieved even without the contribution of some regular starting players like Philip Schneider, Daniel Gavan and Gerald Reiser.

This past weekend in Jablonec nad Nisou the Austrians were edged by the hosts of the Czech Republic as well as by Romania before they could power past Turkey in five sets. This was a very important result especially by taking into consideration that only this past September, at the final round of the EuroVolley 2011 in Vienna, the guys in red and white jerseys were downed by the Turks in three straight sets.

“Last week in Jablonec we did not display the same quality we showed in Istanbul but this is quite understandable especially as some players were struggling with injuries or sick. So far we have scored three wins out of six matches which is quite an encouraging result” says head coach Michael Warm.

Before the home round in Hard, Austria will join this coming weekend the fourth leg taking place in Rotterdam, playing first the Netherlands to continue the program by testing the likes of the Czech Republic and finish it off with Romania. “We are trying to find some back-up solutions for our weak points. Our opponents know us very well and they will try to exploit any weakness we may have or show” adds Warm.

“The home round in Hard is extremely important as the results of the last leg will define the teams advancing to the final four with Turkey being already pre-qualified as organizer” he stresses. “We invite all of our fans to come to the sports hall and support us! Great Volleyball actions are guaranteed, so do not miss your chance to come over and enjoy a great Volleyball weekend” he concludes. 24 school classes will be visiting the European League round in Hard as a result of the Volleyball School Action promoted by the Austrian Volleyball Federation and its sponsor UNIQA.