Denmark will be hosting this coming weekend its home round in preliminary Pool A of the 2012 CEV Volleyball European League – Men with this event representing a first step along the way that takes to the final round of the 2013 European Championship to be co-hosted with Poland. 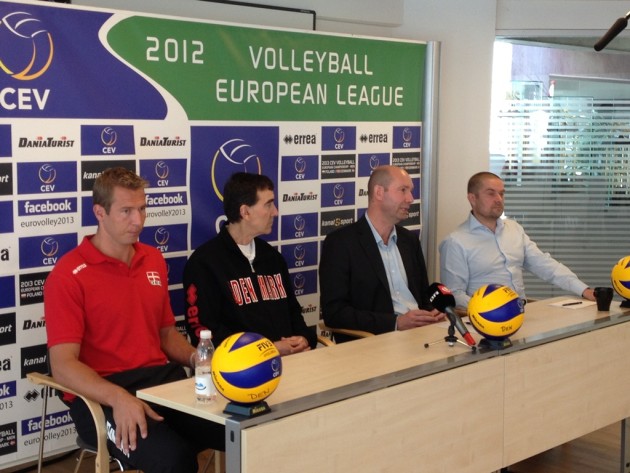 The Sports Director of the Danish Volleyball Federation, Mikael Trolle, while attending a press conference at the local House of Sport in Copenhagen, expressed his pride for having Denmark included in the starting field of a competition that features some of the strongest teams out there. “With 15 months still to go for the European Championship, this home round of the European League comes at the right time as we want to rise up the bar and keep on improving” he said.

Denmark is currently ranked third in Pool A after three rounds but last year’s winners of Slovakia will be resting this weekend and hence the hosts may have a shot at the second position in the standings of the group. “I am surprised that by this stage we did already beat strong sides like Slovakia that finished fifth at the last edition of the European Champs thereby qualifying directly for the event coming up in 2013. This is evidently boosting the self-confidence of our players and it clearly shows that the motivation resulting from a home Championship can help move up the quality of a team” added Trolle.

“The participation in the European League and the development program for next year has really contributed a terrific improvement in the quality of the people I am working with” said head coach Fred Sturm. “I am really fortunate to have this group of great guys who are so committed to their goal. The European Championship next year here in Denmark motivates all of us a lot and gives significance to all the things we do in our everyday life” he added. “We are always practicing as if it was the last day before the start of the Championship and we play every match with the same attitude” he concluded.