The word "historic" is sometimes abused in sport but the Finals of Belgium’s national cup coming up on Saturday deserve to be defined this way. 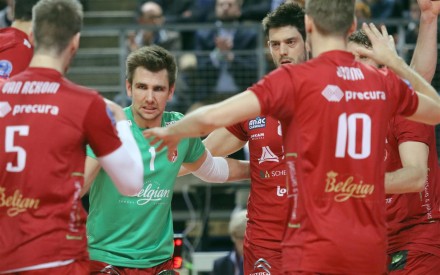 This is indeed the first time in 15 years that the men’s final will be played without at least one of the country’s major Volleyball forces, Knack ROESELARE and Noliko MAASEIK. And it is also the first time that the match will be played at Sportpaleis in Antwerp, which has a capacity of 15,000 and last year’s attendance record – 5,500 fans – is most likely to be smashed.

The final stage of this competition has been traditionally held at the Lotto Arena in Antwerp, but this year the organisers have decided to move to the Sportpaleis, which is situated right next door and has been playing host to a number of other sporting events and to concerts by some of the world’s most accomplished pop and rock stars.

The two teams attempting to rock the night are Precura ANTWERP and Volley behappy2 ASSE-LENNIK, the same teams that in about two weeks will set up a Belgian derby in the Challenge Round of the 2015 CEV Volleyball Cup – Men.

The women of Asterix KIELDRECHT, on the other hand, will play their 15th consecutive final, all of them under the guidance of Gert Vande Broek, who is also the head coach of the Belgian national team. Asterix are the titleholders and reigning national champions but their clash with VDK GENT is also expected to turn into a close confrontation.

Do you envy her? (VIDEO)