Four players of Hungary women’s national team recently had the opportunity to meet with the Austrian-born movie star, former Mr. Universe and California’s Governor, Arnold Schwarzenegger, at the MVM Success-Day in Budapest. 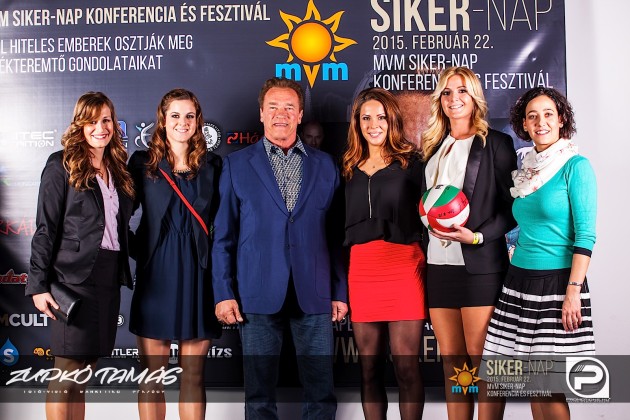 Last year Hungary’s national team secured a spot in the Final Round of the CEV Volleyball European Championship for the first time since 1987. This result was the reason behind the invitation that four players – Greta Szakmary, Szandra Szombathelyi, Zsuzsanna Talas and Evelin Vacsi – received to meet with the Hollywood star and greatest bodybuilder of all time.

After waiting for about half an hour, the girls disappeared with Judit Hegedus, the Press Officer of the Hungarian Volleyball Federation. More than a hundred people waited patiently and luckily the girls who had prepared a special gift for Mr Schwarzenegger – a calendar and a volleyball – were practically standing at the beginning of the queue of people lining up and waiting for the Hollywood star to show up.

Two of them – Greta Szakmary and Szandra Szombathelyi– were a little nervous. “I knew that we could spend only one or two minutes with him, and so we felt really excited,” they said afterwards.

The other members of the national team,  Zsuzsanna Talas and Evelin Vacsi, were a little bit more composed. “He is a great movie star, but he is a human being as well. It was quite special to get to meet with him, and I am very happy with this opportunity, but I was not too excited about it,” one said.  “Everything happened really fast. We just had some time to take a photo. We handed over the gift we had prepared for him, he was surprised, and thanked us very politely,” they recall.

Anastasi supports Skra – “I’m a big fan of Falasca, I wish him win on Wednesday”