There is barely someone that can portray and advertise the BERLIN Recycling Volleys better than he does. Felix Fischer, who was born in Germany’s capital, has been with the team since 2003 and has therefore witnessed the club’s transformational journey from a ‘small’ actor in the Bundesliga into one of the city’s trademarks. 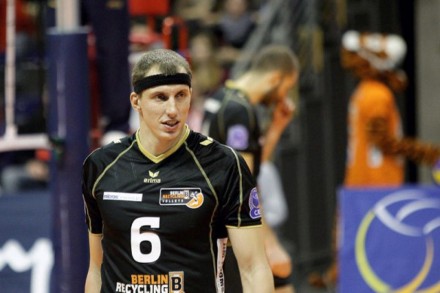 Fischer is among the favourite players of the local crowd that is just counting the days to the Final Four tournament of the 2015 CEV DenizBank Volleyball Champions League – Men that the BERLIN Recycling Volleys will be hosting on March 28-29 at the Max-Schmeling-Halle. In this interview, the 32 year-old middle blocker shares some insights about the team’s preparation for the tournament, the club’s long-term development, and his wishes for the Final Four weekend.

Felix, only three weeks are left until the Final Four. How is the team’s preparation going?

It is going well. Having a few weeks without any official matches comes in handy to us, most recently we had a few friendly matches in Turkey. So far none of us has got injured in practice and we are progressing step by step.

What does it mean to you personally to participate in the Final Four, especially now that it takes place in your hometown Berlin?

I am a Berliner in my heart and soul, so of course this is a unique chance. I guess, playing the Final Four at home happens as seldom as competing in an Olympic Games being held in your hometown. I am very proud to be a part of it. And it is great that we can share this experience with so many people from home. There is hardly anything bigger a Volleyball player can experience. Actually, it would be the perfect timing to put an end to my career once this is all over (laughs).  You have been a member of the team since 2003 and have witnessed the club’s development yourself. When you started your career, would you have dreamed that something like the Final Four of the CEV Volleyball Champions.

No, when I started playing here 12 years ago I indeed would never have dreamed that this could happen. The BERLIN Recycling Volleys have made a huge progress over the last few years. Some years ago we played in front of a small crowd in the Sömmerinhalle in Charlottenburg which cannot be compared to the state-of-the-art Max-Schmeling-Halle we are using now. If someone had told me ten years ago it would be as it is today, I guess, I would have laughed out loud. The club has become more and more professional from year to year and had the guts to break the mould. That turned out to be the right decision. I am happy to see that all of the hard work and energy invested are being appreciated so much. For the club the Final Four is a perfect promotion since the eyes of the entire Volleyball community in Europe will be on Berlin for those two days.

What do you wish for the Final Four?

I hope that there will be thrilling matches played at the highest level, I am hoping for a sold-out Max-Schmeling-Halle, a wicked atmosphere, and of course for our team to play the big final…

More transfer “bombs” from Italy – Đurić to return to Trento?