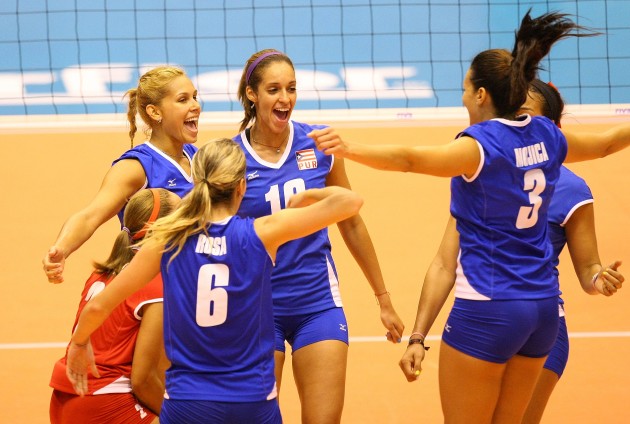 With just one victory apiece going into this match victory was vital for either side’s bid to climb the Grand Prix rankings before the end of Week 2. Leading Puerto Rico in scoring was the duo of Sarai Alvarez and Stephanie Enright with 21 and 20 points respectively. The Dominican Republic’s Gina Altagracia Mambru Casilla led all scorers with 22.

The Dominicans started off shakily with three straight misfires early by captain Milagros Cabral de la Cruz from the wing allowing Puerto Rico an early jump. Rosa had a pair of hard drives to push the Puerto Ricans ahead 8-4 at the first TTO. Strong serving from Annerys Victoria Vargas Valdez brought the Dominicans back to tie 8-8. Candida Estefany Arias Perez looked to energize the Dominicans with an explosive spike to go up 19-18. But ironically, it only sparked Puerto Rico who took every point after that, a run of seven capped by an ace by their captain Vilmarie Mojica to take the first set 25-19.

The Dominicans pulled ahead to an 8-5 lead in the second, but streaky Puerto Rico put together a run of four that included two Enright spikes to edge ahead 9-8. But the Dominicans snatched that lead back as Cabral found her stroke with three successful strikes, as did Gina Altagracia Mambru Casilla who delivered a scoring clinic off the bench to help go up 20-16. Mambru’s eighth point of the set would finish the second 25-21, evening the match at a set apiece. Puerto Rico’s Yarimar Rosa went off with a leg injury in the set too, making it a disappointing frame all around for the team.

The third was close to start but Puerto Rico eventually pulled ahead as Enright was scoring well, helping start a five-point run to go ahead 16-11. That streak featured the point of the match with her captain Vilmarie Mojica diving for a get near the scorers table, leading to a Puerto Rico point. Alvarez made it 20-15 with a hard cross-court drive, and 17-year-old Daly Santana (who had replaced the injured Rosa) brought two late spikes off the bench to help close 25-23, despite a late surge by the Dominicans.

The fourth was a hotly contested set as well with Mambru still scoring well for the Dominicans, but Enright countered for Puerto Rico until the teams reached 10-10. It remained close as Alexandra Oquendo dropped an awkward tip over the net for Puerto Rico to make it 19-19, but the Sidarka de los Milagros Nuñez stepped up for the Dominicans with a pair of spikes to go ahead, and Vargas closed with a stunning block on the young Santana to close 25-21, two sets all.

The Dominican Republic started strong in the tie-break, as a Cabral spike pushed them ahead 5-1, but Puerto Rico bounced back to tie at 6-6. But fittingly the duo of Enright and Alvarez notched six of Puerto Rico’s last seven points, taking the fifth set 15-12, and the match 3-2.