EL W: Czech Republic got to its first win 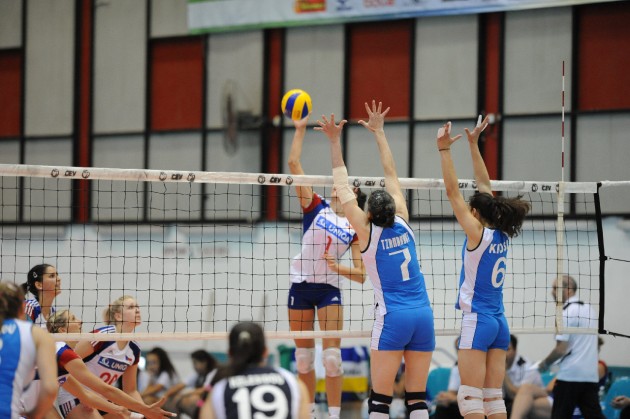 The teams that lost yesterday met today to take advantage of the last opportunity to put three points in the pocket before heading back home. The Czech team started very strong to take the lead 6-3. The first technical time-out came and this break gave the Greeks the chance to come back into the game. But it did not help this time – 11-5 to the Czech team. Anther good spike by Tereza Vanzurova gave the 13th point to the her team. At 18-11 the Greeks took anther time-out to try to come back into the game, but it was too late. The Czech team took the first set by 25-17.

The second set started different – 6-2 to the Greek girls, but it did not last long – a 10-10 score put the Czechs back to the game. The set continued neck to neck through 13-13, but the Greeks came defiantly different to take the lead 17-14 with aggressive spikes by Maria Chatzinikolaou. 20-14 prompted Czech head coach Carlo Parisi to take a time-out, but it did not help this time – 23-15 to the Greeks. Good blocking by the girls in blue from Greece led to 25-16.

The third set started with an 8-4 to the Czechs, but the set continued to be very tight. After 16-13 to the Czech team great serving by Andrea Kossanyiova added another point to the lead – 18-14. Good blocking by the Greeks gave them hope for coming back, but it did not work out. The Czechs won the third set 25-14.

A13-13 score gave the impression of a tight fourth set, but great spikes led to 25-18 and gave the set to the Czechs to win the game by 3:1 and go home with one victory from this tournament.