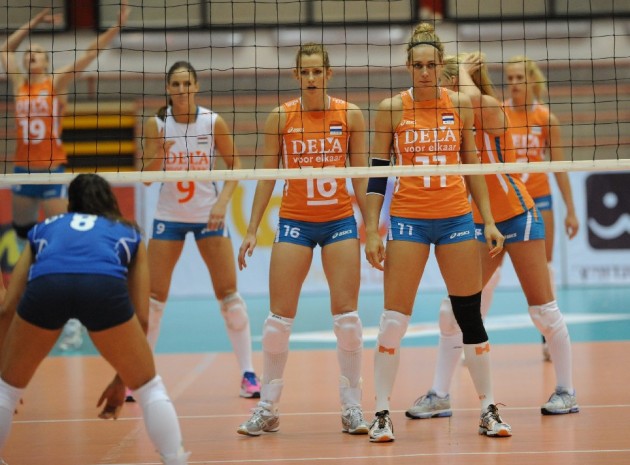 Following the impressive win over the team from the Czech Republic, the Israeli national team was full of expectations for this game against the Netherlands. Although Israel started the game with a 3-0 lead, the Dutch came back and tied the score at 3-3. As the set progressed, the Dutch team had an 8-7 lead playing their well-known lethal offensive game. The Netherlands seemed to have the upper hand as the scoreboard showed a 14-10 lead and the Israeli defense was struggling. On the Israeli side, Tatiana Artmenko had some beautiful spikes leading the Israeli team back to 14-13 in the middle of the set. The Dutch opened a gap once more and started running away to a 18-13 lead. The end of the set was drawing near and the score was 23-18 in favor of the Oranjes. Two points later, the set went their way -25-18.

The third set also began in a balanced manner as the score board showed 6-5 in favor of the Dutch team. Later in the set, the Dutch team took A 14-10 lead showing their superiority on the court once more. The Israeli team would not be denied easily and fought for each point as if it was the deciding game point. Artmenko continued playing impressive volleyball and shined with some extraordinary spikes. Israel came back to 15-13, before the Dutch team ran off again to an 18-14 lead. As the end of the set drew near, the score was 24-22 in favor of the Dutch after some beautiful plays on the Israeli side. One point later, it was all over and the Dutch team had won the game in straight sets.

The Dutch head coach Gido Vermeulen stated: “This was a good game for both teams without many mistakes at all. It was a great tournament altogether, and I especially loved the game tonight vs. Israel.“

The Israeli coach Arie Selinger added: “This was a very good game. I am proud of the Israeli team for the way they played and never gave up. This was definitely a successful tournament for us and we will continue doing our best in the future.“

EL W: Czech Republic got to its first win